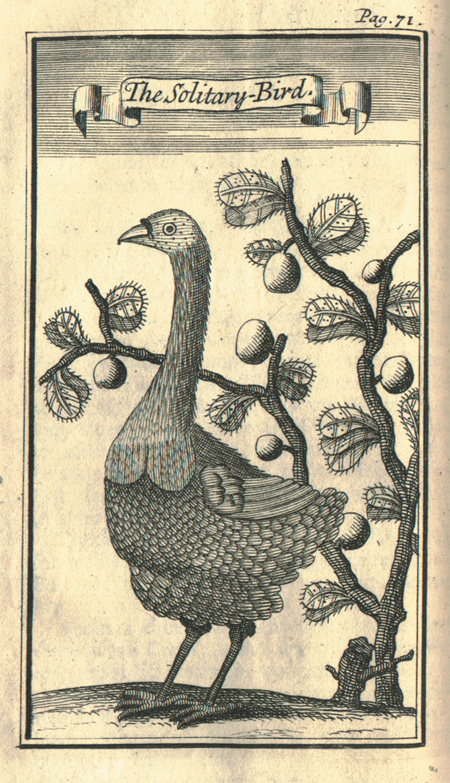 The island of Rodrigues, far out in the Indian Ocean, is one of the Mascarene group and here a dodo-like species evolved from an ancestral pigeon stock. This species has become known as the Rodrigues Solitaire.

The Huguenot refugee Francois Leguat, whose name occurs so regularly in the stories of extinct birds, took a particular liking to this species and it is from his account that most information concerning it is derived. Leguat was marooned on Rodrigues during 1691 and stayed for around two years. He and his small band of followers became entranced by the strange bird they found there and Leguat penned a number of observations of the Solitaire. One of these constitutes the first recorded observation of territorial behaviour in birds:

All the while they are sitting…or bringing up their young one, which is not able to provide for its self in several Months, they will not suffer any other Bird of their Species to come within 200 yards round of the Place; but what is very singular, is that Males will never drive away the Females; only when he perceives one he makes a noise with his wings to call [his] Female, and she drives the unwelcome Stranger away, not leaving it till ’tis without her Bounds. The Female do’s the same as the Males, whom she leaves to the Male. The only other early authority for the birds of Rodrigues is an anonymous author, usually thought to have been a marooned sailor by the name of Tafforet, who wrote a document that has come to be known as the Relation de l’Ile Rodrigue. A translation of the part of this document that relates to the Solitaire reads: The Solitary…weighs…40 or 50 pounds. They have a very big head, with a…frontlet, as if of black velvet. Their feathers are neither feathers nor fur…of a light grey colour, with a little black on their backs. Strutting proudly about…they preen their plumage…and keep themselves very clean…[They] run with quickness among the rocks, where a man, however agile, can hardly catch them…They do not fly at all, having no feathers to their wings but they flap them and make a great noise…I have never seen but one little one alone with them, and if anyone tried to approach it, they would bite him severely. These birds live on seeds and leaves of trees.

Confirmation of the one-time existence of this creature comes from bones found in caves on Rodrigues. Complete skeletons have been assembled and these show that there was an extraordinary divergence in the size of the sexes with the males being much bigger. The bones also confirm some anatomical details that were mentioned by Leguat. The remarks in the Relation indicate that the birds were still plentiful during the 1720’s, and the document is thought to date from around 1725. However, at some time soon afterwards, they seem to have declined rapidly. During 1761 the Abbe Pingre arrived on the island with the intention of viewing the Transit of Venus. He arrived in time to see the heavenly wonder but not, it seems, in time to see the Solitaire. If the species still existed at this time it was so rare that it stood at the very brink of extinction. Solitaires seem to have been tasty birds and it can only be assumed that settlers who arrived on Rodrigues during the eighteenth century ate them out of existence.