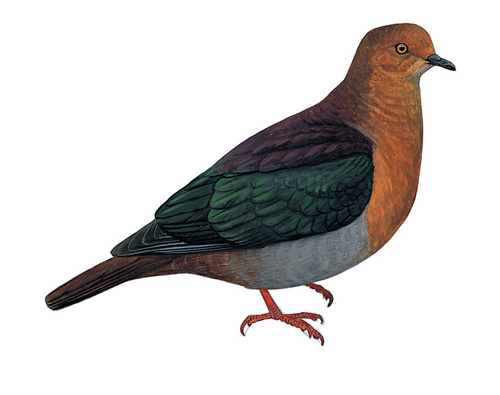 The Tanna Ground-dove is known today from just a single, rather crude, painting by Georg Forster that was produced during Captain Cook’s second voyage around the world. This painting is in the Forster portfolio at the Natural History Museum, London, and in the margin the following words are inscribed:

Tanna, female, 17th August 1774. Nothing more is known of the species. A specimen of it did once exist although this, like the species itself, vanished long ago. Concerning the events of 17th August Georg Forster’s father, Johann Reinhold, made this spare record: I went ashore, we shot a new pigeon and got a few plants.

The island of Tanna is one of the islands of Vanuatu, and for many years it had an ugly reputation on account of the ferocity of the native inhabitants. For this reason it was seldom visited during the nineteenth century, and at some time during that period the native pigeon seems to have passed away.