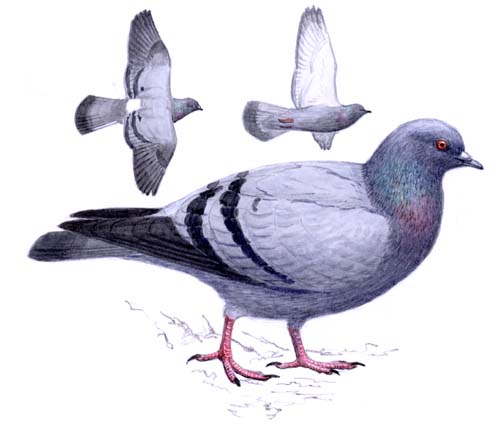 Rock Pigeons, more commonly known simply as just “pigeons,” are familiar birds in any developed area. Chunky birds with sharply pointed wings, Rock Pigeons are found in a variety of colors and patterns, although all gray is most common. Rock Pigeons have black bills with white fleshy bases, red eyes, red fleshy eye-rings, and salmon-colored feet. Rock Pigeons are fast fliers and are usually seen in flocks. They forage mostly on the ground, but occasionally forage in trees as well. Unlike their agile, native cousin, the Band-tailed Pigeon, Rock Pigeons move about only clumsily in trees. Large groups often congregate along utility wires, window ledges, and rooftops.

Listen to the sound of Rock Pigeon

Rock Pigeons are found in a wide variety of habitats, especially suburban, urban, and agricultural environments. Their original native habitat is cliff-sides.

In urban and suburban areas, Rock Pigeons nest on a variety of covered, flat surfaces, including ledges and beams in bridges and buildings. In natural areas, they nest on sheltered cliff-ledges. Pairs may form long-term bonds. The male supplies nesting material, and the female builds the nest, a platform of twigs and grass. Nest sites are used repeatedly and nesting material is added for each new brood. A pair may raise 5 or more broods a year. Both parents incubate the 2 eggs for 16-19 days, and both feed the young ‘pigeon milk,” a protein and fat-rich liquid produced in their crops. At about 4 weeks of age, the young leave the nest.

Seeds and grain make up most of the Rock Pigeons’ diet on farms, but in cities, popcorn, bread, and other human food is usually part of their diet.

This species has a large range, with an estimated global Extent of Occurrence of 10,000,000 km2. It has a large global population, including an estimated 17,000,000-28,000,000 individuals in Europe (BirdLife International in prep.). Global population trends have not been quantified; there is evidence of a population decline, but the species is not believed to approach the thresholds for the population decline criterion of the IUCN Red List (i.e. declining more than 30% in ten years or three generations). For these reasons, the species is evaluated as Least Concern.
Columba livia is a widespread resident across much of Europe (except the far north), which accounts for less than half of its global range. Its European breeding population is very large (>9,300,000 pairs), and was probably stable between 1970-1990. Although there were declines in several countries-notably Russia-during 1990-2000, the species was stable or increased across most of Europe. The status of the
truly wild population of this species in Europe is obscured by confusion with feral birds. This pigeon inhabits the major part of Europe, north to 65
← Previous Post
Next Post →