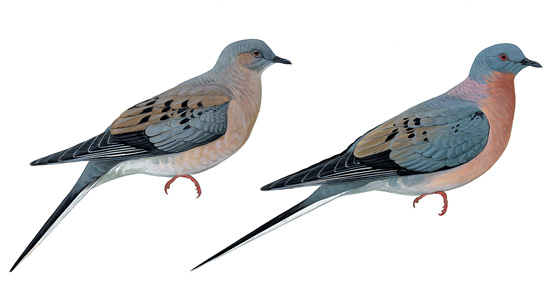 The celebrated Passenger Pigeon has, perhaps, the most extraordinary story of any extinct bird. It may once have been the most numerous bird on Earth, and at the start of the nineteenth century vast flocks of this species blackened American skies. Yet during the course of 100 years the tremendous numbers dwindled until just a handful of birds remained.

The last individual of all, a female named Martha, died in her cage at the Cincinnati Zoological Gardens at 1:00 p.m. on 1st September 1914. Early descriptions of the massed flights of the Passenger Pigeon are remarkable. In 1759 a certain Peter Kalm wrote:

In the spring of 1749…there came from the north an incredible number of these pigeons to Pennsylvania and New Jersey. Their number, while in flight, extended 3 or 4 English miles in length, and more than one such mile in breadth, and they flew so closely together that the sky and the sun were obscured by them, the daylight becoming sensibly diminished by their shadows. The big as well as the little trees…sometimes covering a distance of 7 English miles, became so filled with them that hardly a twig or a branch could be seen which they did not cover…when they alighted on the trees their weight was so heavy that not only big limbs and branches were broken straight off, but less firmly rooted trees broke down completely under the load. The ground below the trees where they had spent the night was entirely covered with their dung, which lay in great heaps.

During the 1830’s John James Audubon penned his famous account: The air was literally filled with pigeons, the light of noonday was obscured as by an eclipse; the dung fell in spots not unlike melting flakes of snow…pigeons were still passing in undiminished numbers and continued to do so for three days in succession.

These vast and spectacular flights rendered the Passenger Pigeon vulnerable in a quite remarkable way. So easy was it to shoot the birds that one simply had to point a rifle skywards and repeatedly pull the trigger. Hunting competitions were organized and for one of these it is known that a haul of more than 30,000 dead birds was necessary to claim a prize. With many hands turned against it there is little wonder that Passenger Pigeon numbers began to fall drastically. However, it is simply not possible to shoot such a numerous species out of existence. It seems that there were additional factors and that these factors centered around the species’ need to operate in such vast groups. The birds moved around nomadically, looking for rich crops of beechmast, acorns or chestnuts, and when an exceptionally good site was located the birds were attracted in huge numbers. The forests were steadily depleted, however, and so good crops became fewer and farther between.

To compound this, so many thousands of pigeons were shot that their scouting capacity dropped, making it even more difficult for them to locate adequate food supplies. Once numbers had fallen below a certain level, even though that level may have been incredibly high, the Passenger Pigeon was doomed as a species. Clearly this was a creature that could only survive in huge numbers. The critical figure may have been a million individuals, it may have been twenty million; we shall never know. But at some point during the mid-nineteenth century, the figure was passed and from that moment onwards the species was spiralling downwards to extinction.

The decline became apparent during the 1870’s. At the start of this decade the flocks seemed as healthy as ever, but by its end the ranks were noticeably thinned and by the end of the century the species was virtually gone from the wild, leaving only a few individuals in captivity. It seems that the decline was accelerated too by an outbreak of Newcastle disease, a paramyxoviral disease that attacks the digestive tract and nervous system, and is known to affect domestic poultry as well as many species of wild bird. The Passenger Pigeon was quite unlike most other pigeons. Its body was beautifully streamlined, with a small head and long, pointed wings and tail. This body design allowed the bird to fly with great swiftness and agility. When wheeling, dropping or rising in the air, the beautiful, yet subtly marked, plumage would flash spectacularly in the sun.

Naturally, such enormous numbers had a marked effect on the vegetation. The birds ate acorns and nuts of all kinds as well as fruit, grain, insects and other invertebrates. When they nested they did so in colossal colonies and sometimes these extended for many kilometres. Nesting sites of 65 km were recorded and it is estimated that 16 km by 5 km were characteristic. The nest was flimsily made from twigs, and one white egg was laid. The peak breeding period occurred in April and May, although breeding could take place at any time between March and September. Both parents helped with the incubation, and the single chick was cared for by the adults until it was around two weeks old. Then, suddenly, the old birds would depart leaving the fat chick abandoned and crying in the nest. After a while the baby bird would drop to the ground and a day or two later it would take to the air and leave.