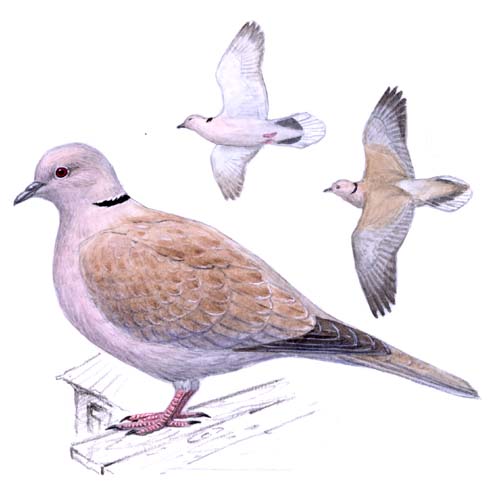 Collared Dove has pale greyish sandy plumage. Upperparts are pale buffy-grey on back, wings and uppertail. Underparts are light buffy-pink on breast and belly.
Wings show light scaly pattern with pale edges, and dark primaries. Long tail has white outer feathers, and grey central feathers. Undertail feathers have black base and broad white tips.
Head is pale sandy grey, with black half-collar on nape. Bill is black, relatively short and thin. Eyes are dark red. Legs and feet are pink.
Both sexes are similar, but female may have browner head than male.
Juvenile lacks black half-collar, and resembles adults.
Collared Dove feeds on the ground, but also frequents bird-feeders in winter. They come to gardens or any places with grain and seeds. They feed in large flocks around farms and grain stores. They may also pick berries from bushes.
Collared Dove is seen solitary, but often in pairs. This species is resident in its range. They are very gregarious.
During courtship displays, male performs some beautiful flights, from roof, tree or other high perch. Male rises up into the air, it claps its wings with noise before to perform a long glide down with wings and tail spread out. On the ground, mates hop at about one metre high, flapping their wings, and hopping again while calling. They also perform chasing in the air, and they are so beautiful, perched on a wire, “kissing” each other on head, neck and nape.

Listen to the sound of Collared-Dove

Collared Dove lives in urban and rural areas, farmlands, thickets, orchards, parks, gardens and grain stores.
GEOGRAPHIC RANGE: Collared Dove is native to India, Sri Lanka and Myanmar. They migrated to Europe last century, and their range is continuously larger, until above Arctic Circle in Scandinavia.
Species has been introduced in Bahamas in the 1970’s, and now is extending its range from Florida to Texas, with sightings increasing in California.

Collared Dove begins to breed in early March until late October. Nest is a very loose platform in tree, hedgerow or dense bush. It is made with some thin twigs and dry stems, very flat and small. Some nests may be lined with soft grass, but most of them are very simple.
Female lays 2 smooth white eggs. Incubation lasts about 14 days by both parents. Chicks hatch altricial, covered with sparse yellowish down. Both parents feed them with crop milk, and young fledge at about 18 to 19 days after hatching. They fly when they are 3 weeks old.
This species may produce several broods per season, from 2 to 4 or 6.

Collared Dove feeds mainly on seeds, but also some buds, soft fruits and garbage. They drink by sucking and don’t need to put the head back to swallow.