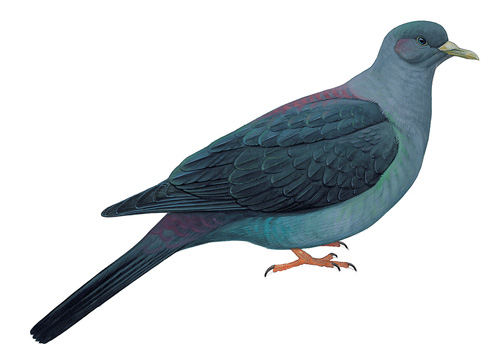 The avifaunas of several islands to the south of Japan have been badly depleted, and one of these island groups, the Bonins (Ogasawara), has lost several distinct forms. One of these was the Bonin Pigeon, a large, dark bird that was discovered in 1827 during the exploratory voyage of HMS Blossom. It seems to have survived until around 1890, the last known specimen being collected during 1889. The bird’s general unwariness and the implication that it showed no fear of man doubtless contributed to its downfall. Very little is known of its habits but it seems likely that it required wellwooded territory where it probably fed upon fruit, seeds and buds.

The species is known to have inhabited Peel Island (Chichijima) and Nkondo-shima and it probably lived on other islands of the Bonin group. There seem to be only three specimens of the species in existence. One belongs to the Natural History Museum, London, a second is in St Petersburg and the third is in Frankfurt.