Source to all birds on the Planet
admin
Africa, Balaenicipitidae, Ciconiiformes
Comments 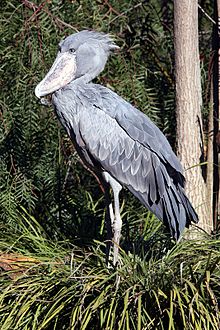 The unmistakable, prehistoric-looking shoebill is one of the most impressive birds to be found in Africa. A mysterious inhabitant of impenetrable marshes, this tall wading bird possesses a bluish-grey plumage, long black legs, broad wings and muscular neck, but is undeniably dominated by its fantastically unique ?shoe-like? bill, from which its common name derives. This imposing greenish-brown bill is huge and powerful at a remarkable 23 cm long and 10 cm broad, ending in a ferociously sharp nail-like hook. The eyes are a pale yellow and at the back of the head exists a small hood of feathers.

Listen to the sound of Shoebill

A predominantly solitary species, in which adults come together only to breed. The breeding season is ill-defined, but some evidence suggests that it coincides with the onset of the dry season, to prevent flooding of the nests. One to three eggs are laid in large flat nests built amid swamp grasses, and incubated for approximately 30 days. Young can stand only after two and a half months, and are able to hunt after three and a half, but remain dependent on their parents for food until somewhat older. It takes three to four years for young to become sexually mature and individuals have been known to live 36 years in captivity.

The shoebill usually feeds at night, hunting chiefly by ambush, standing motionless waiting for prey, then attacking with remarkable speed and power. Prey is grasped from the water in the bird?s sharp, hooked beak, which grips, crushes and pierces in one instant. African lungfish are common prey, alongside a variety of smaller and larger fish, amphibians, water-snakes, lizards, turtles, rats, young waterfowl and even young crocodiles.

This rare and localised species is listed as Vulnerable because it is estimated to have a single small population within a broad Extent of Occurrence. The population is undergoing a continuing decline owing to hunting, nesting disturbance and the modification and burning of its habitat.
Not endemic – In Zambia, fire and drought threaten habitat (especially in Bangweulu, where a
decline is apparent), there is some evidence for trapping and persecution, and nests are trampled
by large herbivores feeding in the swamps. Over most of its range, it is threatened by habitat
destruction and degradation, disturbance, hunting, and capture for the bird trade.

This species is mostly sedentary, although it may make some movements in order to find optimal feeding habitat as water levels vary. In the southern Sudan there are regular seasonal movements between feeding and breeding zones.