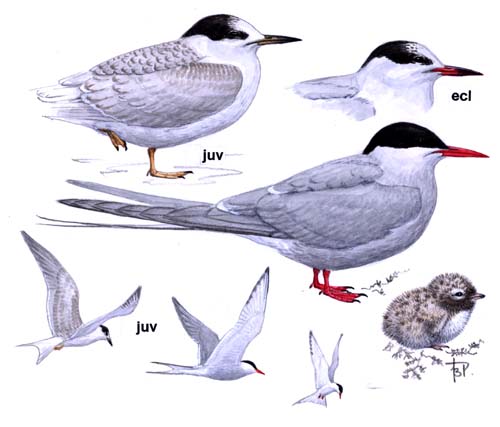 The Arctic Tern is slightly smaller than the Common Tern with long, narrow wings and very short legs. In breeding plumage, the Arctic Tern has a light gray mantle and belly. The lower half of the face is white, and the upper sports a black cap without a crest. The tail is white, and usually projects beyond the wingtips when the bird is perched. The bill and legs are red. The adult does not show the black ‘wedge’ in the outer flight feathers that is present on Common Terns, and instead shows a thin, black border on the trailing edge of the primaries, visible from below. In the non-breeding season, the Arctic Tern has a receding black cap, with a white forehead extending halfway back its head, and the legs and beak are black. Juveniles have a light brown wash to their plumage, but this is mostly gone by August. At first, the young have orange feet, which then turn black. A dark bar is visible on juveniles’ wrists.
The Arctic Tern forages by flying slowly upward, hovering briefly, and dropping from the air to catch prey below the water’s surface. They also steal food from other birds, startling them into dropping their catch by swooping at them. Arctic Terns are seldom seen resting directly on the water, even during their long migration. They may, however, be seen perched on floating logs and other debris

Sterna paradisaea is a widespread summer visitor to the Atlantic seaboard of northwest
and northern Europe, which accounts for less than a quarter of its global breeding
range. Its European breeding population is large (>500,000 pairs), and was stable
between 1970-1990. Although there were declines in Greenland, Norway and the
United Kingdom during 1990-2000, trend data were not available for the stronghold
population in Iceland, and most of the populations were stable or increased.
This tern has a wide distribution in boreal and arctic regions of the Northern Hemisphere. In Europe it is breeding from the British Isles and the Netherlands to the Urals. It inhabits mainly marine coasts, but locally also inland lakes. It is wintering offshore Antarctica. The population of the European Union (12 Member States) is estimated at 65000 breeding pairs, which accounts for 12.5% of the total European population. Notwithstanding some local fluctuations, the species seems currently to be stable

Listen to the sound of Arctic Tern

The Arctic Tern nests on marshes, tundra lakes, and shorelines in the Arctic, and south on the East Coast to New England. From 1977 to 1995, Arctic Terns nested on gravel islands and parking lots in Everett (Snohomish County). During the non-breeding season, the Arctic Tern is highly pelagic, spending most of its time on the open ocean, far from land.

Diet varies with season and location, but is primarily fish, crustaceans, and insects.

Arctic Terns don’t breed until they are 3-4 years old. Both sexes help build a nest on the ground in a colony, sometimes mixed with other species of terns. The nest is out in the open, a shallow depression, often lined with plants and debris. Incubation is by both sexes and lasts about 3 weeks. The parents vigorously defend the nest, dive-bombing intruders. One to three days after hatching, the young leave the nest and hide in nearby cover. Both parents help feed the young until they fledge, usually at 3-4 weeks of age. After that, the young stay with their parents for one or two months more.

This species has a large range, with an estimated global Extent of Occurrence of 10,000,000 kmÂ². It has a large global population estimated to be 1,000,000 individuals (Wetlands International 2002). Global population trends have not been quantified, but the species is not believed to approach the thresholds for the population decline criterion of the IUCN Red List (i.e. declining more than 30% in ten years or three generations). For these reasons, the species is evaluated as Least Concern. (source Birdlife.org)

Migratory, performing most extensive movements of any bird. Main wintering zone lies in Antarctic pack-ice between c. 55Â°E and 150Â°E, though western border of range extends to 30Â°W. Post-breeding migration, from late July in south of breeding range to early October in north, occurs along 2 principal routes, one through Atlantic and one through eastern Pacific. Birds breeding in Canada, north-east USA, Greenland, Spitsbergen, Faeroes, Iceland, northern Europe, and coast of northern Siberia (excluding easternmost parts) converge on route along west coast of Europe and Africa. Movement through Britain, Ireland, and north-west Europe mostly coastal or offshore, but regularly occurs inland in small numbers, though less so than in spring. To join North Sea/Atlantic route, Siberian birds initially travel west along coasts of Arctic Ocean, then south along seaboard of northern Europe. Those from Nearctic perform wind-aided transatlantic crossing at c. 50-60Â°N. Course in spring approximately reversed; European breeding populations reoccupy breeding grounds early May in south of range, sometimes not until near end of June in north. Regular inland on spring passage, Britain, sometimes in abundance
Distribution map breeding season