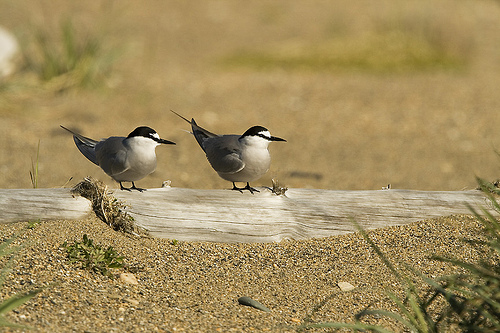 Measuring 30-32 cm long with a 73-75 cmd wingspan, the Aleutian Tern weighs only 3.9 ounces. In breeding plumage, this fairly small seabird is grey over most of its body with a white tail and underwing. Contrasting with the white forehead and face, the black cap and bill connect through a thick line passing through the black eye. The short legs are also black. In nonbreeding plumage, the Aleutian Tern is grey above and white below. Its black cap withdraws to cover the back of the head and the nape and to just touch the back of the eye with a thin, black strip. In flight, this tern appears deep chested and flies directly, with deep wing beats.

In North America, this tern breeds only in Alaska from the Kasegaluk Lagoon along the northwest coast to Glacier Bay on Alaska’s southern coast. Colonies are not faithful to one coastal site but are found most often from Point Hope south around the Seward Peninsula and into the Yukon-Kuskokwim River Delta, Cape Newenham, the Alaska Peninsula, and predator- free Aleutian Islands. Colonies are also scattered at several sites along the Siberian coast. The winter range and migratory routes are unknown. Observations in the 1990’s suggest that it winters and/or migrates near the coasts of Hong Kong, Singapore, and several Indonesian Islands (Karimun, Bintan, Java, Bali and Sulawesi).

Listen to the sound of Aleutian Tern

During the breeding season and perhaps for migratory staging, the Aleutian Tern lives over coastal waters. Here, it forages over shallow, oceanic waters, estuaries, rivers, and freshwater ponds. Breeding colonies require remote locations with even terrain: islands, tundra, arctic and subarctic meadows, river deltas, and sandy spits. A variety of vegetation may provide some concealment for nests: grasses, sedges, deep moss, low shrubs, and rushes. The nonbreeding habitat is probably the open ocean.

Small fish, crustaceans, and insects are the preferred foods for Least Terns; small mollusks and marine worms are eaten as well. Least Terns forage over water, hovering briefly before plunging in to catch tiny prey just below the surface; they sometimes dip to pluck prey from the surface or to catch insects in flight.

Nesting occurs in a variety of habitats (e.g. islands,
shrub-tundra, grass or sedge meadows, and freshwater and
coastal marshes). The nest is generally a depression in
short or matted vegetation and nests are widely scattered in
the colony.
In early May, Aleutian Terns arrive on their breeding grounds and immediately form pairs. Courtship displays have rarely been observed, but all terns are known to engage in ritualized flights, feeding, and walking. In loose colonies near the coast, regularly mixed with other tern species like the Arctic Tern, the Aleutian Tern makes a simple bowl nest by depressing grasses, sedge, sand, or even fine gravel. The nest is sometimes lined with grass stems. Both sexes have brood patches and probably take turns incubating 1-3 light yellow eggs, marked with dark brown speckles and blotches. In about 3 weeks, the downy hatchlings emerge capable of leaving the nest, if necessary. Two weeks after hatching, the young hide in nearby vegetation and fledge at 1 month old. The parents continue to feed them through the fall, when juveniles gather before migration.

This species has a large range, with an estimated global breeding Extent of Occurrence of 50,000-100,000 kmÂ². It has a large global population estimated to be 30,000-35,000 individuals (Wetlands International 2002). Global population trends have not been quantified, but the species is not believed to approach the thresholds for the population decline criterion of the IUCN Red List (i.e. declining more than 30% in ten years or three generations). For these reasons, the species is evaluated as Least Concern. (source Birdlife.org)

Little information. Arrives in breeding areas mid-May and leaves by mid-Sept. Non-breeders presumably pelagic, dispersing into Bering Sea and N Pacific. No Neartic records outside Alaska, and only accidental in Commander Is and Japan. Winter records from Philippines, and recorded as migrant Hong Kong, but main wintering areas still unknown. One extraordinary record of vagrancy: an adult in Britain in May 1979.
Distribution map breeding season

Title The probable Breeding of the Aleutian Tern in Southeastern Alaska
Author(s): F. SEYMOUR HERSEY
Abstract: A record in the May, 1920, number of THE CONDOR (p..[more]..
Source: The Condor, 22, 12