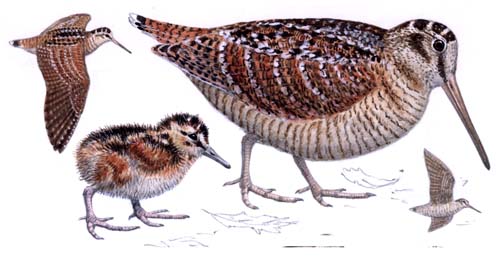 Listen to the sound of Woodcock

During breeding season in moist forests, where favours mosaic habitats, and ectensive woodland covered by undergrowth of scrub, brambles, holly, gorse and bracken. Avoids warm and dry areas. often feeds along streams or springs, or in damp and swampy patches. Often gathers for roosting and feeding in earthworm-rich permanent grasslands at night.

Mainly animals, with some plant matter. Animals include earthworms, insects particularly beetles, but also earwings, spiders, crustaceans, slugs, leeches and ribbonworms. Plant material comprises seeds, fruits, oats maixw grain and roots and blades of various grasses.
Feeds by probing in puddles or damp ground, or by pecking at ground surface, or under leaf litter and twigs, may use foot-trembling. Mostly feeds at night, especially outside breeding season, when earthworms taken on pasture land may predominate.