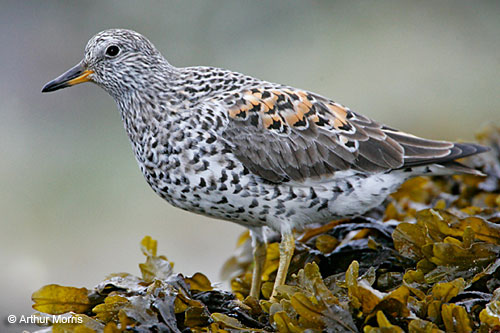 A stocky dark sandpiper of wave-washed rocks. Note the conspicuous white tailtipped with a broad black band. Breeding: Heavily streaked and spotted with blackish above and below; golden scapulars. Winter:
Solid gray above and across breast. Bill short, yellow at base; legs yellowish.

Listen to the sound of Surfbird

Rocky coasts; nests on mountain tundra. During migration and in winter, mostly on rocky outer coasts and islands, also on stone jetties and breakwaters. Sometimes on sandy beaches or mudflat
s, especially during brief stops on migration. In summer, breeds on rather barren, rocky tundra above treeline in northern mountains.

Eggs: 4. Buff, spotted with dark reddish brown. Incubation is by both sexes, incubation period not well known.
Young: Downy young leave nest soon after hatching. Both parents tend young, but young find all their own food. Development of the chicks and age at first flight not well known.

Mostly insects, mollusks, barnacles.
In summer on tundra, feeds mostly on insects; also spiders, snails, seeds. On coast (where it spends most of year), feeds on mollusks, such as mussels, limpets, and snails, as well as barnacles and other crustaceans, other small invertebrates.

Behavior: Major feeding method on coast involves removing barnacles, limpets, and
young mussels from rocks with a quick sideways jerk of the head; the Surfbird’s thick bill is adapted for this behavior. Also picks up snails and insects from ground or rocks, sometimes probes in mud.

Breeds in Alaska, Yukon. Winters on coast to
southern South America. Migration:
Limited breeding range, but wintering range stretches from Alaska to Chile. Some can be found on wintering range at least from late July to early May. On our southern Pacific Coast, the only noticeable migration peak occurs in spring, mainly April. 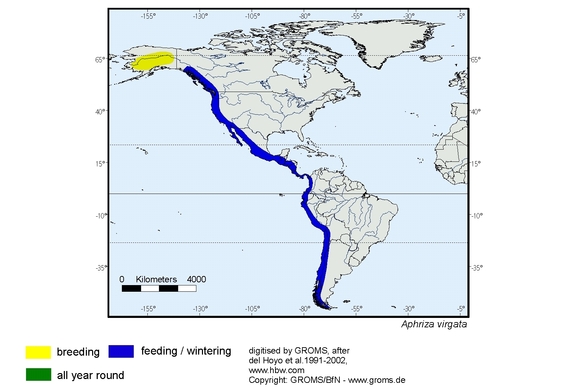