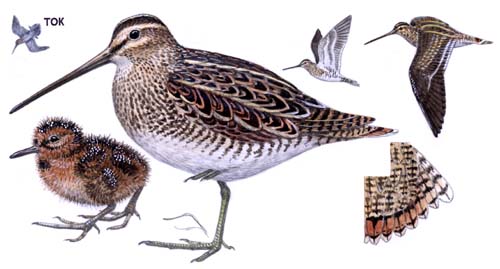 Listen to the sound of Snipe

Egg laying from April to June, pair bond monogamous, but both sexes show high degree of promiscuity. very territorial. Nest usually on dry spot, covered by grasses, rushes, sedges or sphagnum. 4 eggs, incubation 17-20 days, by female alone. Chicks are mahogany red, moe hazel brown or tawny on sides of head and underparts, with black and white bands on head. Both parents care for young, but male entices oldest 1 or 2 from nest to tend.