Source to all birds on the Planet
admin
Charadriiformes, Eurasia, Scolopacidae
1 Comment 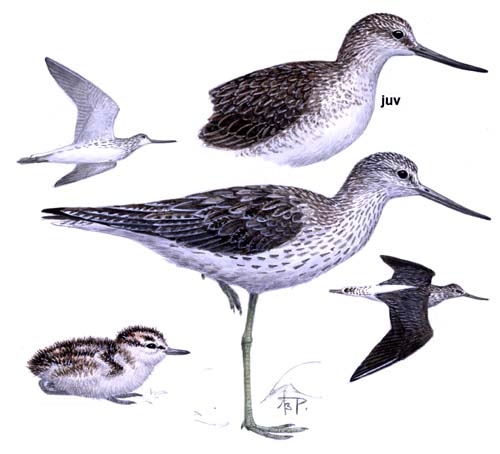 Listen to the sound of Greenshank

Egg laying from April to June. Usually monogamous, though some males bigamous. High degree of site fidelity, but new generations don’t built near parent nest (no natal philopatry). Nest is a shallow scrape lined with some plant material, on ground in the open, typically placed next to piece of dead wood. 4 eggs are laid in a single brood, incubation 24 days done by both sexes, but males with two mates normally do little incubation. Chick pale grey marked above with fuscous black, white belly.

Diet chiefly insects, especially beetles, but also crustaceans, annelids, molluscs, amphibians and small fish.
Usually pecks and probes in shallow water walking with steady pass, sometimes running with erratic changes of direction. When feeding on fish may forage socially in dense flocks of conspecifics or mixed with other tringines, moving erratically while pecking at prey or running synchronously in one direction, ploughing or scything bill through water.
Singly or in small to large flocks of up to 100’s. Feeds diurnally and nocturnally.

Migratory. Like other Tringa, will migrate on broad fronts overland. Especially in western Europe, however, largest numbers pass through coastal (especially estuarine) sites. Small numbers winter in western Europe, in Mediterranean basin, and on Atlantic coast of north-west Africa; however, majority of west Palearctic birds are trans-Saharan migrants (penetrating south to Cape Province). Further east, winter range extends to Indian Ocean islands and across southern Asia from Iraq to eastern China and Philippines, and through Melanesia to Australia.
One parent (usually ), but not always) leaves territory in late June or first half July, when young c. 4 weeks old; other parent and young depart when latter fully fledged, 3-6 weeks later. Main autumn passage through northern and temperate Europe from 2nd week of July to late October. Return movement begins March in Africa; passage through Europe (in general more direct, and without large coastal concentrations noted in autumn) evident in April, though main movement through North Sea countries and into Fenno-Scandia in first half of May. Some non-breeders remain south all summer.