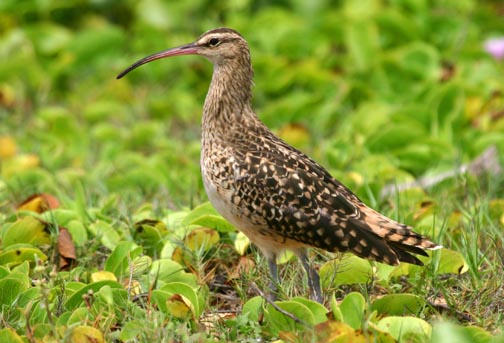 Listen to the sound of Bristle-thighed Curlew

Early in breeding season, male displays by flying over nesting territory, calling.
Nest: Site is on the ground on hilly upland tundra with scattered small shrubs, with nest often placed directly under a dwarf willow. Nest is a shallow depression in tundra, lined with bits of lichen, moss, and leaves.
Eggs: Usually 4. Olive-buff, blotched with brown. Incubation is by both sexes, roughly 25 days.
Young:
Downy young leave nest soon after hatching, are tended by both parents. Young feed themselves. Adults are very aggressive in defending the nest and young; may put on “distraction display” to lure predators away, or may directly attack even large predator
s. After a few days, families with young move away from nest site, eventually gathering with other families on hilltops. Adult females usually depart before young fledge, leaving males to care for young.

Includes crustaceans, insects, berries.
Summer diet probably includes many insects. In late summer, may feed heavily on berries. On Pacific islands where it winters, feeds on crustaceans, snails, small fish; also eggs of seabirds.
Behavior: Forages mostly by walking on ground, picking up items f
rom surface, probably also probing in soil or mud with bill. In feeding on thick-shelled eggs of albatrosses on winter range, may pick up a piece of rock and use it to crack shell, a rare case of tool use by a bird.

This species is listed as Vulnerable because its population is now small and believed to be declining, largely as a result of predation on the wintering grounds, when perhaps more than 50% of adults are flightless during autumn moult.

Breeds in western Alaska. Winters on islands in central and southern Pacific. Migration:
After nesting, most individuals gather on the Yukon Delta in western Alaska to feed heavily on berries and insects, building up fat reserves, then depart on nonstop flight of over 2,500 miles to Hawaii and other islands in Pacific.