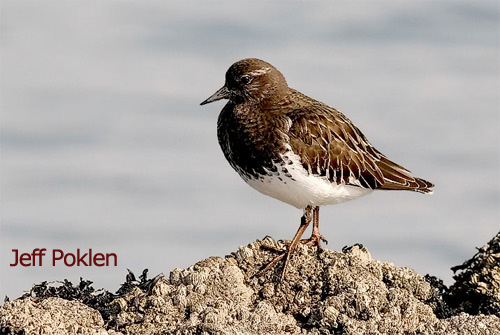 A squat, blackish shorebird with a blackish chest and white belly. In spring, a round white spot before the eye, and white speckling. Flight pattern similar to Ruddy Turnstone’s. Legs dark.

Listen to the sound of Black Turnstone

Strictly coastal. Rocky shores, breakwaters, islets; nests on coastal tundra. During mig
ration and in winter, typically found in rocky sites along coast, such as rocky shoreline, jetties, breakwaters; also on mudflats and sand beaches at times. Breeds in Alaska on wet tundra near estuaries or lagoons, very close to coast.

Adults often return to exact same sites and nest with same mate each year. Male displays with circular flight over territory.
Nest: Site is on ground, usually close to water among grasses or sedges, either in the open or hidden by tall vegetation. Nest (probably built by both parents) is shallow depression, lined with grasses.
Eggs: 4, sometimes 3. Yellowish green to olive, blotched with dark brown. Incubation is by both sexes, usually 22-24 days.
Young:
Downy young leave nest soon after hatching. Both parents tend young at first, but female usually leaves after about 2 weeks, leaving male to care for them; young find all their own food. Young can make short flights after about 23 days, can fly well at a
bout 28-30 days.

Includes barnacles, mollusks, insects. On breeding grounds, feeds on insects, also some seeds and berries. On coast, barnacles and limpets are among main foods. Also eats other crustaceans and mollusks, marine worms.

Behavior: On coast, forages mostly by walki
ng slowly on rocks. Feeding on acorn barnacle, may insert bill in shell opening and pry it open, or hammer on shell to break it. Limpets and other mollusks are pried from rocks with pointed bill. On beaches, may turn over rocks, shells, or seaweed, seekin
g food underneath.

Breeds in Alaska. Winters along coast to western Mexico. Migration:
Apparently follows the coastline closely in spring migration. In fall, some birds may take a shortcut across the Gulf of Alaska, flying southeast across the water from western Alaska rather than taking the long way along the coast.