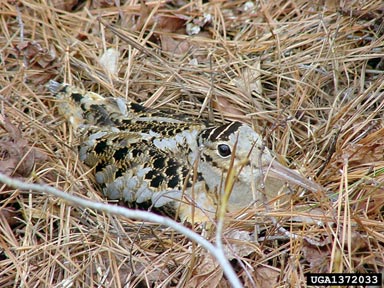 A rotund, almost neckless brown bird with a dead-leaf pattern and broadly barred crown. Near size of Bobwhite, with an extremely long bill, large pop eyes. Usually flushed from a thicket, producing a whistling sound with its short, rounded
wings.

Listen to the sound of American Woodcock

Wet thickets, moist woods, brushy swamps. Favors a mix of forest and open fields, often spending day in the forest, night in the open. Mostly in deciduous or mixed woods with much young grow
th and moist soil, such as thickets along streams. At night may be in open pastures, abandoned farm fields, open swamp edges.

Mostly earthworms and insects.
Earthworms are usually major prey. Insects also important, especially larvae that burrow in soil, such as those of many beetles, crane flies, others. Also eaten are millipedes, spiders, snails. Consumes some plant material, including seeds of grasses, se
dges, smartweeds.
Behavior: Feeds mostly by probing with bill in soft soil. Tip of b
ill is sensitive and flexible, allowing bird to detect and then grab creatures in the soil. Sometimes performs odd rocking motion while standing; possibly the vibration from this will disturb earthworms into moving.