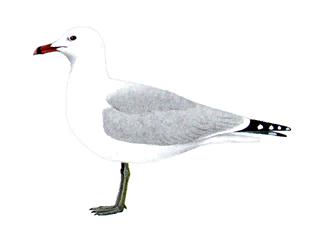 Larus audouinii breeds locally in coastal areas and on islands of the Mediterranean,
with Europe holding >75% of its global breeding population. Its European breeding
population is relatively small (<19,000 pairs), but increased substantially between 1970-1990. The stronghold population in Spain continued to increase during 1990- 2000, and the species underwent a large increase overall. Nevertheless, more than 90% of the European breeding population occurs at just 10 sites.

Listen to the sound of Audouins Gull

Mainly on fish, in particular clupeiforms, especially sardines, also insects and aquatic invertebrates, small birds, voles, and plant matter.
Forages mainly at sea, skims close to water and seizes fish from just below surface, without pausing. Joins other seabirds exploiting surface shoals of fish.
During a moratorium on trawling, species shifted to feeding in marshes and rice fields, and also occasionally in rubbish dumps.

Arriving at the nesting sites between late March and early April, Audouin’s gull forms colonies from a few pairs to several thousand pairs even up to over 10.000 pairs. Nest is build among rocks and vegetation and consists of a scrape lined with debris. Each pair faithfully returns to the same breeding colony each year, but different nesting sites are used depending on the success of the previous year’s clutch. Between late April and early May the female lays two to three eggs and incubation lasts 27-33 days. The chicks fledge in mid July, when both adults and young leave the colony for the wintering grounds.
Chick pale grey-buff above, mottled dark brown, with marks forming stripes.

Larus audouinii breeds in (all data for pairs) Spain, mainly the Chafarinas Islands and the Ebro Delta with the latter holding 65% of the global population, Algeria (500-600), Greece (750-850), and the Sardinia and Tuscan Archipelago, Italy (550-650), with smaller colonies in Corsica, France (between 54-60 5 and 80), Cyprus (10-20), islets and rocks in the southern Adriatic Sea near Korcula and Peljesac Peninsula, Croatia (6-7), Turkey (20-50), Tunisia (70) and Morocco (50). It winters on the coast of north and west Africa from Libya west to Morocco and south to Mauritania, Gambia, Senegal and Gabon. The global population has been estimated at 19,200 pairs, and a recent assessment put the European population at 18,000-19,000 pairs (encompassing over 90% of the global population) and stable or increasing throughout. This represents a significant increase from an estimated population of 1,000 pairs in 1975 and is thought to be a result of the increased availability of discarded fish from the fishing industry, particularly around the Ebro Delta1. The large expansion of Larus audouinii in the western Mediterranean has probably caused the breeding population in the eastern Mediterranean to increase and new colonies have been found in Portugal and Croatia. The ecology of this species, particularly its breeding behaviour, has been extensively studied. The fishery at the Ebro Delta is regarded as unsustainable and its collapse would probably result in a rapid decline in the dependent breeding population. More than 90% of the European breeding population occurs at just ten sites. Additional threats include coastal tourism developments, regulation of the river Ebro, and predation by terrestrial predators, such as red fox Vulpes vulpes and domestic dogs. Predation by sympatric bird species is a pressure at some breeding colonies, e.g. by Herring Gull L. argentatus michahellis in the Bay of Ajaccio, Corsica, and by Yellow-legged Gull L. cachinnans and Peregrine Falco peregrinus in the east of its range. (source Birdlife.org)

Dispersive or partially migratory. Outside breeding season (and immatures in summer), reported from many points around Mediterranean and its islands. Always thinly distributed away from colonies. Substantial numbers pass west in autumn through Straits of Gibraltar, to winter on Atlantic coast from Cap Spartel (Morocco) south to at least SÃ©nÃ©gambia, and some immatures summer off Morocco.
Distribution map breeding season
Distribution map wintering season