Source to all birds on the Planet
admin
Charadriiformes, Jacanidae, Middle America
Comments 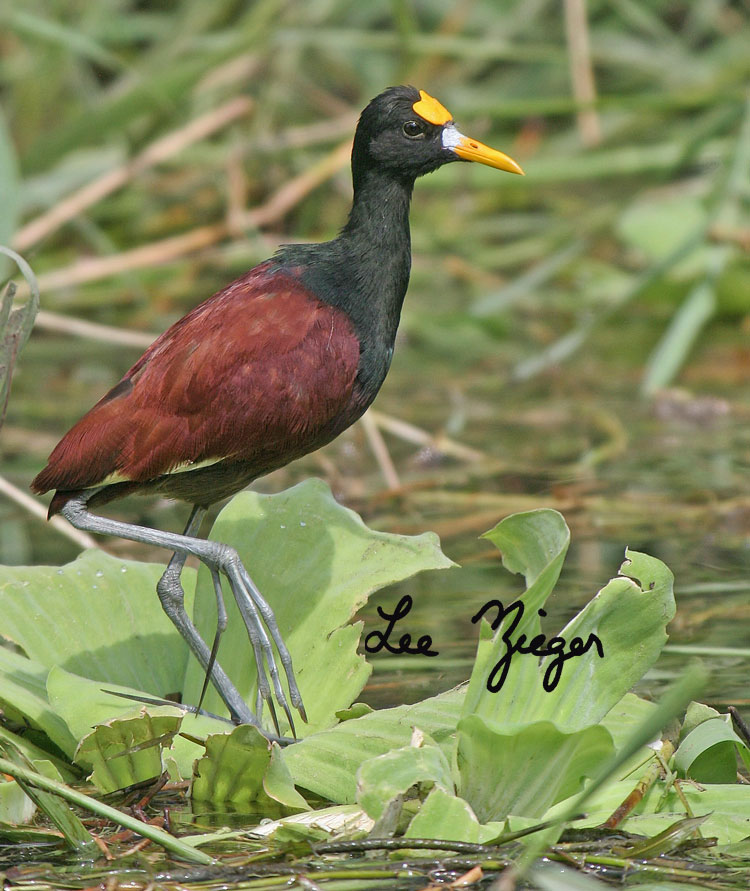 Built somewhat like a shorebird, with extremely long toes. Adult: Head and neck blackish, rest of body deep rusty. The best field marks are the conspicuous yellow frontal shield on the forehead and
large palegreenish yellow wing patches. Immature:
Gray-brown above, whitish underparts; a broad white stripe over the eye. The extremely long toes and great lemon yellow wing patches, also the raillike flight, notes, and habitat, distinguish it from any shorebird.

Listen to the sound of Northern Jacana

Marshes, overgrown ponds. In the tropics, found on a wide varie
ty of shallow freshwater ponds and lake margins, especially those with much floating vegetation. In United States, has occurred mostly in Texas, on large fresh ponds surrounded by extensive marsh and with floating plants such as lily pads, water hyacinth.

One female may have up to 4 mates; she lays eggs in separate nests for each, and males do almost all the work of incubating the eggs and caring for the young.
Nest: Site is on top of marsh vegetation, either standing or floating, in shallow water. Nest (built by male) is a flimsy open cup made of available plant material; male continues to add to nest during incubation period.
Eggs: Usually 4, sometimes 3-5. Almost round; brown, scrawled with black lines. Incubation is by male only, 22-24 days. During hot part of day, male shades eggs from sun.
Young: Downy young leave nest within 1-
2 days after hatching. Male tends young and leads them to feeding sites, but young feed themselves; male broods young during rain or cool weather. Female sometimes accompanies young, but less than male. Age at first flight about 4 weeks.

Mostly insects. Diet in Texas not well known. In Costa Rica, reported to feed almost entirely on insects; occasionally eats small fish.
Behavior: Forages by walking about on mats of floating vegetation, picking insects from surface of plants or water, sometimes from just below water’s surface. Also forages on mud or open ground near water.

Southern Texas (rarely) to western Panama; West Indies. Migration:
No regular migration, but wanders irregularly. Seems to stray into Texas most often after a series of seasons with good rainfall have created much good habitat in northeastern Mexico and southern Texas. Has also strayed to Arizona, possibly Florida.