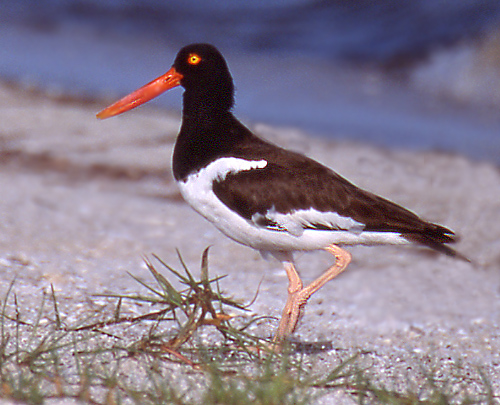 Listen to the sound of American Oystercatcher

Sometimes may mate for life. In courtship display, two birds walk and then run side by side, giving loud piping calls; may take off and fly together. Sometimes may form trios, with one male and two females attending one nest or two nearby nests.

Nest: Site is on ground, on marsh island or among dunes, above high tide mark. Nest (apparently built by both sexes) is shallow scrape in sand, sometimes lined with pebbles, shells.
Eggs: 1-4. Buffy gray, usually speckled with dark brown. Nests attended by two females and one male may have 5-6 eggs. Incubation is by both sexes, 24-28 days.
Young: Downy young leave nest shortly after they hatch. Both parents feed young for at least 2 months after hatching, although young attempt to forage on their own before parents stop feeding them. Age at first flight about 5 weeks.

Mostly shellfish and marine worms. Feeds mostly on mussels, clams, oysters; also marine worms, sand crabs, limpets, sea urchins, jellyfish, and other small creatures of the intertidal zone.
Behavior: Often forages by walking in shallow water, searching for food by sight. Finding an oyster or mussel with its shell open, the oystercatcher quickly jabs its bill into the shell, cutting the muscles and then cleaning out c
ontents. May also take a closed mussel and hammer it open. Probes in mud for clams and other items, and pries limpets off rocks.