Source to all birds on the Planet
admin
Charadriiformes, Eurasia, Glareolidae
Comments 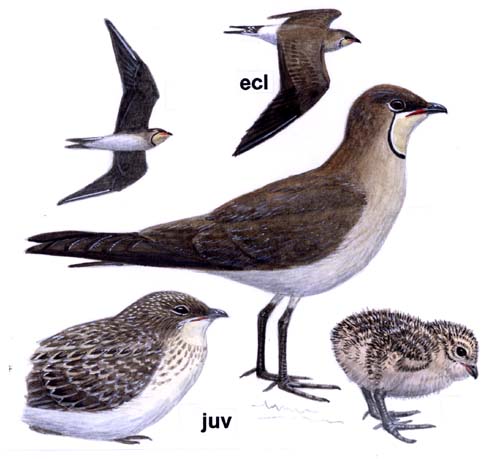 Black-winged Pratincole is 24â€“28 cm long, with short legs, long pointed wings and a long forked tail. It has a short bill, which is an adaptation to aerial feeding. The back and head are brown, and the wings are brown with black flight feathers. The belly is white and the underwings are black.

Listen to the sound of Black-winged Pratincole

The breeding range of the species stretches throughout the steppe zone of Eurasia from Romania and Ukraine in the west to the Russian Altai and Kazakhstan in the east. Occasionally the species is recorded as breeding further
north, in the forest-steppe zone. In the north of the desert zone, it forms large colonies in the valleys and in the river deltas.
Nest in loose colonies or several tens or hundreds of pairs on open ground, usually near water, occasionally several thousand in colony. Sites may move from year to year, even when still apparently suitable.
Nest is a simple scrape, sparsely lined with dry plant pieces. 3-4 eggs, incubation by both sexes. Chick similar to that of G. pratincola but somewhat darker.
From 60% to 100% of clutches and chicks die annually because of trampling of nests and chicks by grazing cattle, increased predator pressure, namely by corvids, predation by terrestrial mammals which varies from year to year depending on availability of other food sources. Oher threats are heavy rains and hailstorms and severe droughts.

Insectivorous bird, feeding on beetles, ants, grasshoppers,
locusts etc. In spring often feeds close to colonies on
patches of bare ground. In summer catches insects in the air, flying at lower altitudes over ground or water. At the end of summer usually feeds in flocks high in the air, catching abundant insects. In wintering areas feeds on locusts and other flying insects. Requires water for
drinking, and during the day makes regular flights to areas of water. Forages mainly on the wing, often in flocks of hundreds or even thousands of birds, especially when locusts are swarming, also feeds on ground by running swiftly after prey, usually hunts in early morning and late evening, often after dusk.

Although difficult to classify, the evidence of declines in Europe, West Africa and Central Asia indicate that this species has experienced moderately rapid overall declines, and thus warrants Near Threatened status.
Glareola nordmanni is a summer visitor to south-east Europe, which accounts for less
than half of its global breeding range. Its European breeding population is small (as
few as 2,500 pairs), but was stable between 1970-1990. However, the species declined
across most of its European range during 1990-2000-most crucially in its Russian
stronghold-and underwent a very large decline (>50%) overall. Consequently, this
previously Rare species (categorised as Data Deficient at a global level) is now
evaluated as Endangered.
The evidence of declines in Europe and West Africa and equivocal evidence from Kazakhstan indicate that this species is declining fairly rapidly and and thus warrants Near Threatened status. Further information from central Asia and Asiatic Russia may indicate that an even higher category of threat is appropriate.
Threats are poorly understood. Where declines are occurring the key factors are probably the conversion of steppe to arable agriculture, egg and chick mortality from trampling livestock and agricultural operations, such as harrowing. In Ukraine, predation by corvids may affect breeding success. In the wintering grounds, agricultural practices and grassland degradation may have reduced the area of available habitat.