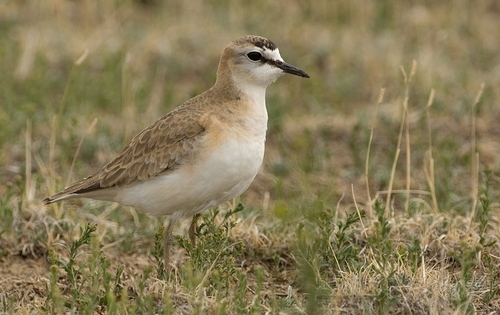 Somewhat like a small Killdeer, but with no breast-rings. In breeding season, has a white forehead and line over the eye, contrasting with a dark crown.
In nondescript winter plumage, it may be told from winter Golden-Plovers by its grayer back (devoid of mottling), pale legs, light wing stripe, and dark tail band.

Listen to the sound of Mountain Plover

In breeding season, male displays by flying high with exaggerated slow wingbeats, calling. Female may lay one clutch of eggs and leave male to care for eggs and young, then lay another clutch and incubate it herself.
Nest:
Site is on flat open ground. On featureless plain, nest often placed close to some conspicuous object, such as a pile of cow manure. Nest is shallow scrape in soil. Nest lining (including pebbles, grass, chips of manure) added mostly during incubation.

Eggs: 3, sometimes 2, rarely 1-4. Olive-buff with black marks. Incubation is by one or both sexes, 28-31 days. On very hot days, adult will stand over eggs, shading them.
Young: Downy young leave nest soon after hatching; are tended by one or both parents, but feed themselves. Adults shade young on hot days. Young can fly well at about 33-34 days.

Mostly insects. Diet is not well known; but in the dry upland habitats where this plover lives, it probably feeds almost entirely on insects, including grasshoppers, beetles, flies, and crickets.
Behavior: Forages by walking on ground, picking up items from surface. Typically stands still for a few seconds, scanning ground, then runs forward a short distance to peck at insects on ground.

This species is classified as Near Threatened because it has a moderately small population. However it is continuing to decline as a consequence of habitat loss and degradation resulting from cultivation, urbanisation, over-grazing, and changes in native herbivore populations.
Hunting probably explains the long-term decline. More recently, cultivation and urbanisation have reduced nesting habitat, and intensive grazing has resulted in desertification and a reduced prey base. Large declines in grazing species, especially bison and prairie dogs, have resulted in unsuitable habitat succession. Over 70% of nests on cultivated land are destroyed by farm machinery.