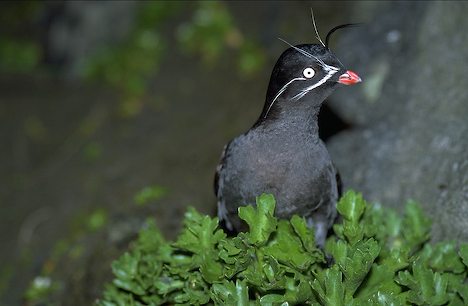 Similar to the larger Crested Auklet, but in addition to the curled black plume on the forehead this bird has three thin white plumes on each side of the face. In winter the plumes are shorter.

Listen to the sound of Whiskered Auklet

Ocean, rip currents, rocky coasts.
Usually at sea within a few miles of islands, in relatively shallow water. Favors rough water where currents converge, or where tidal currents race across shallows or through narrow passes between islands. Nests on islands among rocks or cliffs.

Breeds in colonies, not as densely packed as in related small auks. Active at colonies mostly at night, especially when not nesting in association with other species. Courtship behavior not well known, includes pairs calling in duet.
Nest: Sites in small openings in talus slopes, boulder piles, or crevices in cliffs, sometimes in areas of soil mixed with rock. No nest built; egg laid on bare rock or soil.
Eggs: 1. Dull white. Incubation by both sexes, roughly 35-36 days.
Young: Both parents feed young, visiting nests at night, bringing food in throat pouch. Age of young bird at departure from nest not well known, may be about 40 days. Fledgling departs by flying away from nest site at night.