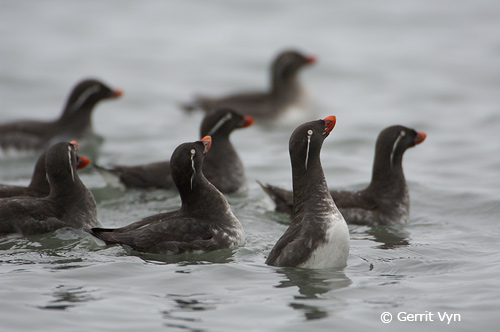 The Parakeet Auklet is a small seabird with a short thick orange bill that is slightly upturned. It is dark colored above and white below, with a white plume behind the yellow eye. In summer its eye plume may disappear. Males and female look similar.

Listen to the sound of Parakeet Auklet

breeds on the cliffs, slopes and boulder fields of offshore islands. Needs plenty of rock crevices for nesting colony. Only comes ashore to breed. Breeds in April and May in colonies. Often nests in mixed colonies with other Auk species. Female lays a single egg which hatches after about a month.

The Parakeet Auklet feeds on small crustaceans such as euphausiids, copepods and amphipods. It sometimes feeds on jellyfish or small fish. Can dive up to 30m in search of prey.

This species has an extremely large range, and hence does not approach the thresholds for Vulnerable under the range size criterion (Extent of Occurrence <20,000 km2 combined with a declining or fluctuating range size, habitat extent/quality, or population size and a small number of locations or severe fragmentation). Despite the fact that the population trend appears to be decreasing, the decline is not believed to be sufficiently rapid to approach the thresholds for Vulnerable under the population trend criterion (>30% decline over ten years or three generations). The population size is extremely large, and hence does not approach the thresholds for Vulnerable under the population size criterion (<10,000 mature individuals with a continuing decline estimated to be >10% in ten years or three generations, or with a specified population structure). For these reasons the species is evaluated as Least Concern.
Parakeet Auklets are widely distributed from Southeast Alaska, across the Gulf of Alaska, in most of the Bering Sea, and in the Sea of Okhotsk in Siberia.
They are locally distributed in Southeast Alaska (small numbers south to St. Lazaria, Hazy and Forrester islands) and on the Kenai Peninsula. In the Gulf of Alaska, they are found on the Shumagin and Semidi islands and on Chirikof Island near Kodiak. Areas of concentrations are the Aleutian Islands west to Buldir and Agattu, and in the Bering Sea (Little Diomede, St. Lawrence, King, St. Matthew, Pribilof, and Nunivak islands).

Migratory movements poorly known. dispersal from late Aug to early Oct. Some birds over winter in open waters near breeding locations (Pribilofs, Aleutians), but most birds probably move considerable distances S to winter offshore in oceanic waters N Pacific, S as far as Japan (Hokkaido, and irregularly to Honshu) and casually to S California. No winter sightings from the Gulf of Alaska, few from SE Alaska and British Columbia, and regular records from Washington to California; similar exodus from E Bering Sea, Kamchatka and Sea of Okhotsk S and offshore of Kurils to Japan. Most birds return to colonies Apr-May, late May and early Jun at northernmost sits: arrives Commander Is and Aleutians late Apr, St Lawrence I by mid-May, and Bering Strait (N Chukotskiy, Diomede Is, Seward Peninsula) late May to early Jun. Migratory movements and patterns complex, requiring further study; apparently influenced by fluctuations in surface temperatures and salinities.