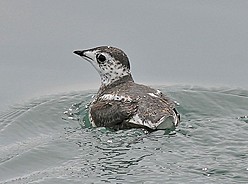 In summer, scaled below (as in Marbled Murrelet) but freckled with white above, giving a paler look. White outer tail feathers. In winter (not likely to be seen) similar to Marbled Murrelet, but
white on face surrounds eyes.

Listen to the sound of Kittlitzs Murrelet

Solitary in breeding, on islands and mainland; few details known. Nest: Site is on ground on steep rocky slope with little vegetation, often 1,000-
3,000′ above sea level and several miles inland from ocean (can be more than 45 miles inland). Often at base of large rock, and may be fairly near stream flowing toward ocean. No nest built; egg laid on bare rock or ground.
Eggs: 1. Pale olive with brown and gray spots. Incubation probably by both sexes, but details (including length of incubation period) unknown.
Young: Probably fed at nest site by parent(s) for at least 2-3 weeks. Some young may then travel along streams and rivers to reach sea, probably before old enough to fly strongly; others may fly directly from nest to ocean.

Not well known. Bill is shorter than that of Marbled Murrelet, suggesting a different diet; known to eat small crustaceans, and possibly eats fewer fish than Marbled Murrelet.
Behavior: Forages by diving and swimming underwater, propelled by wings. Does most feeding in cold waters fairly close to shore, probably where relatively shallow.

This poorly known alcid has recently suffered an extremely rapid population decline owing to a variety of threats, qualifying it as Critically Endangered. However, recent surveys suggest that the population may not be undergoing such a steep downward trend, and upon clarification the species may warrant downlisting in the near future.
There have been strong links made between this species’s decline and areas of glacial recession (possibly as a result of climate change). Other threats include habitat degradation and repeated disturbance of birds owing to recreational and commercial tour-boat traffic; mortality in gill-net fisheries (documented in Prince William Sound, Yakutat Bay, and near Kodiak Island); mortality from petroleum contamination (7-15% of the Prince William Sound population died as result of the ExxonValdez oil spill); and a change in prey species abundance adversely affecting piscivorous fish. Boat traffic in Glacier Bay was found to cause a 30-fold increase in flight behaviour, and nearshore densities of murrelets were temporarily suppressed by vessel passage, although this was not found to result in a persistent loss of foraging habitat. In 2008 the US Government auctioned leases to drill for oil and gas in the Chukchi Sea off Alaska, raising the potential prospect of catastrophic oil spills at in an area where the species is known to breed if drilling is allowed to commence. Near-zero productivity in 1996-1998 for unknown reasons may lead to further future declines. Birds breeding in the western Aleutians have been found to have low reproductive success, with losses during the incubation period primarily due to avian predators locating unattended eggs, and chick mortality during the nestling period largely due to inclement weather.