Source to all birds on the Planet
admin
Alcidae, Charadriiformes, extinct
Comments 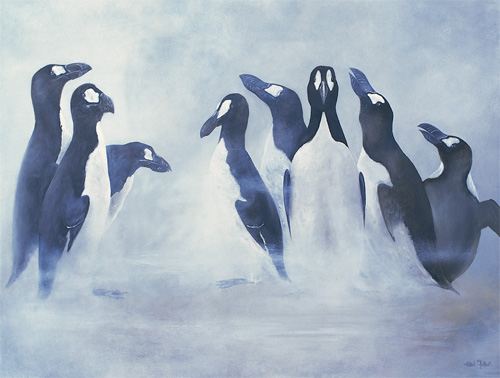 The Great Auk is one of the true stars of extinction. Its story rises and falls like a Greek tragedy. This was a creature that had evolved perfectly to take advantage of a particular ecological niche but its very adaptation rendered it totally incapable of withstanding the depredations of man. It is probably true to say that the species was doomed from the prehistoric day when man first invented the boat. Use of boats enabled men to visit lonely islands and skerries, to round capes and headlands and reach otherwise inaccessible stretches of coast, and thus to pursue Great Auks to their final refuges.

The weakness in the Great Auk’s lifestyle lay in the fact that it had lost the power of flight, and when it waddled clumsily ashore to breed in large colonies on islands of the North Atlantic it was totally vulnerable to a predator as ruthless and inventive as man. In addition, its large size made it a natural target. For ten months of each year Great Auks lived at sea, and it was only the necessity of breeding that brought them ashore for a few brief and doom-laden weeks. First, Great Auks were driven back from all their most accessible breeding haunts. Then they were steadily forced back into even more remote areas. By the start of the eighteenth century they bred only on a few far-flung islands, each of which was difficult to land upon. The greatest of the breeding colonies appears to have been at Funk Island, off the coast of Newfoundland, and here the birds assembled in vast numbers during the months of May and June. Unfortunately for the auks the island lay near to the end of a long stretch of open water on the sea route from Europe to America.

Hungry sailors feasted on the defenceless creatures and discovered that not only did they provide a handy food source, but also their feathers and the oil from their bodies were very useful commodities. By the late eighteenth century this vast colony had been wiped out and for all practical purposes the Great Auk bred only on a few islands off the coast of Iceland. On one of these in particular, the species seemed safe. This was an island known as the Geirfuglasker (which loosely translated means “Great Auk island”). The birds were safe here simply because the prevailing currents were so fierce and unpredictable that the island was almost impossible to land upon. While the species was wiped out elsewhere, the stronghold on the Geirfuglasker still held out. Then, catastrophe befell. A submarine volcanic explosion during the winter of 1830 caused the Geirfuglasker to sink beneath the surface of the waves never to reappear. When the few surviving Great Auks returned to their breeding rock and found it gone, they were forced to choose another site. This they did and they selected the infamous island of Eldey, a great rock that held one major disadvantage: although difficult to land upon, such a feat was by no means impossible. And land man did. In the first raid upon the island 24 birds were caught. A year or so later 13 were obtained. Each successive raid brought a dwindling haul until in June of 1844 just two individuals – a male and a female – were killed. None was ever seen again.

The story of the killing of these supposedly “last” two birds has acquired almost legendary status and it occurs in many variants. All of these variants derive from the notes of two Victorian ornithologists, John Wolley and Alfred Newton, who recorded the tale after conducting extensive interviews with the Icelanders who actually participated in the event. Their notes show that on either 2nd or 3rd June an eight-oared fishing boat left the Icelandic mainland and made for the island of Eldey. Here, three of the crew struggled ashore and spotted two Great Auks among hundreds of smaller seabirds. They pursued the pair, caught them both and strangled them. The men returned to the boat and with great difficulty managed to scramble back into it. Once safely back on the mainland the leader of the raiding party took the road to the Icelandic capital Reykjavik, where he hoped to sell the birds. On the road it seems that he met, by chance, a trader with an interest in Great Auks – and the dead birds were sold on the spot. Curiously, the skins themselves vanished and no-one knows for certain what became of them (there is, however, some evidence to show that they might be the specimens now in Los Angeles and Brussels), although the internal organs of these two birds, preserved in spirits are now at the Zoological Museum in Copenhagen. After its extinction, the surviving relics of the Great Auk – in the form of eggs and stuffed birds – became highly sought after.

Through the second half of the nineteenth century, and afterwards, such items changed hands for large sums of money. In 1890 a stuffed bird would have cost around 400 pound (the price of four or five ordinary-sized houses) and an egg only slightly less. Although the species has acquired a sort of cult status, surprisingly little is known of it in life. We know it was flightless, that it lived in and around the waters of the North Atlantic and must therefore have preyed on fish and other oceanic creatures. We know it laid a large pyriform egg, that it came ashore – helplessly – to breed for a few weeks each year, and that it spent the rest of its time at sea. The rest is speculation.