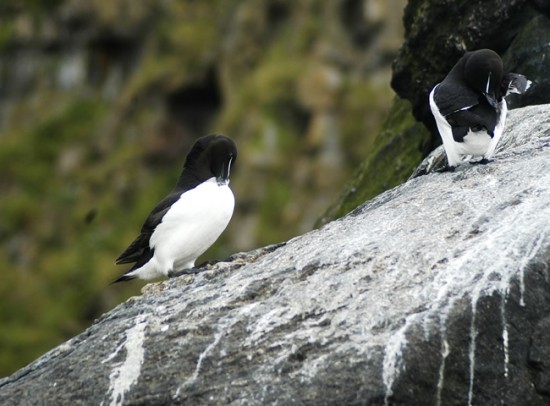 Razorbills are heavy-billed auks with an unusually long, rather graduated tail. During summer the head and the throat of adult Razorbills are black and dark chocolate brown. The under parts, including the under wing coverts, are white. There is a narrow white line extending forward from the eyes to the top of the bill. The gape is bright yellow and its iris is dark brown. Their legs and feet are black.

During winter the adult Razorbills are in their breeding plumage, but their throat, sides of neck, and face behind the eye are white. The vertical white line on the head and bill is less prominent.

Alca torda is a widespread breeder in coastal areas of north-west Europe, which
constitutes >75% of its global breeding range. Its European breeding population is
large (>430,000 pairs), and increased between 1970-1990. Although the trend of the
stronghold population in Iceland during 1990-2000 was unknown, the species was
increasing or stable in most of the rest of its range.

Listen to the sound of Razorbill

Razorbill colonies occur on cliffs and offshore islands. They breed colonially in rocky, coastal regions on mainland cliffs and on offshore islands. In most areas breeding locations are situated in boulder screens or on cliff-faces in rock crevices or on ledges. Because the chicks cannot fly when they leave the colony, the breeding site must give immediate access to the sea. They feed in continental shelf waters, and usually feed rather close to shore than Common Murres (Uria aalge). Sometimes, Razorbills scatter among the Murres.

In general, adult Razorbills mainly feed on mid-water schooling fish: capelin, sandlance, herrings, sprats, and juvenile cod. However, the species of the fish vary regionally. Adult Razorbills wintering off Newfoundland feed mainly on crustaceans. In Labrador the diet of adult Razorbills early in the season is largely capelin, but after the chicks hatch the adult take only some capelin but large numbers of small Myxocephalus sculpins and euphausiids.

For the chicks, the parents usually bring one to six fish at a meal. Only occasionally do they bring up to 20 fish. Yet, the number of fish brought in a meal decreases as their size increases. The parents hold the fish crosswise in the bill to feed the chicks. Average length of fish brought to chicks varies in different regions.

Egg-laying for Razorbills start in the first week of May and laying continues until the first week of June. At higher latitudes, or where water temperatures are lower, laying is later. A female Razorbill can produce only one egg each season. Most breeding sites are enclosed or partially enclosed to protect the egg from predators. The single egg is usually laid directly on bare rock, but some parents would collect small stones, dried dropping, lichen or other bits of vegetation from the immediate surrounding area and place them where the egg will be laid.

Before laying their eggs, at least half of the females leave their mates and sneak off to another ledge to copulate with other males. Then they come back and copulate with their mates on an average of 80 times in the 30 days before the laying of the first egg. Later, while their mates are safely occupied incubating their eggs, the females slip away again to the neighboring ledge for more copulation. The couplings are like auditions to see who is better and are probably important in pair formation.

This species has a large range, with an estimated global Extent of Occurrence of 1,000,000-10,000,000 kmÂ². It has a large global population estimated to be 1,500,000 individuals (del Hoyo et al. 1996). Global population trends have not been quantified; there is evidence of a population decline (del Hoyo et al. 1996), but the species is not believed to approach the thresholds for the population decline criterion of the IUCN Red List (i.e. declining more than 30% in ten years or three generations). For these reasons, the species is evaluated as Least Concern. (source Birdlife.org)

Winters mostly offshore at sea, in W Atlantic off E Newfoundland as far as Flemish Cap (c. 700 km offshore), off Nova Scotia S regularly to North Carolina, and common on Georges Bank off New England. In E Atlantic, movements outside breeding season roughly similar to those of Uria aalge, but extends farther S. Overall, N populations move S or SW: Greenland and Labrador birds to offshore E Newfoundland and SW to Gulf of Maine and farther S, those from Barents and White Seas to Skagerrak, like Baltic breeders. N British birds first move to SW Norway and North Sea (young birds later to Bay of Biscay), whereas those from Irish Sea move S to Bay of Biscay and W Mediterranean. Most birds return to colonies from mid-Apr to early May in W Atlantic, except where ice persists longer (e.g. Labrador), and between early Mar and mid-Apr in E Atlantic, though some colonies reoccupied by late Feb or earlier. Dispersal patterns complex, requiring further study of birds at sea outside breeding season on both sides of Atlantic.
Distribution map

Title Effects of island isolation and feral mink removal on bird communities (Alca torda) on small islands in the Baltic Sea
Author(s): Mik l NordstrÃ¶m and Erkki KorpimÃ¤ki
Abstract: 1.) Predation has been suggested as a major cause ..[more]..
Source: Journal of Animal Ecology (2004) 73 , 424-433