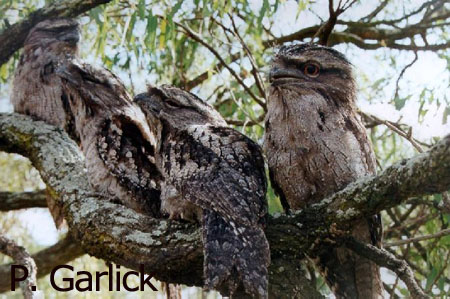 The general plumage of the Tawny Frogmouth is silver-grey, slightly paler below, streaked and mottled with black and rufous. A second plumage phase also occurs, with birds being russet-red. The eye is yellow in both forms, and the wide, heavy bill is olive-grey to blackish. South-eastern birds are larger than birds from the north.

Listen to the sound of Tawny Frogmouth

Australasia : Australia. The Tawny Frogmouth is found throughout Australia, including Tasmania.

The Tawny Frogmouth can be seen in almost any habitat type (except the denser rainforests and treeless deserts), including heath, forest and woodlands, urban and rural areas.

The male and female pair for life, roosting near each other during the day. Breeding occurs from August until December with one brood per season. The same nest may be used from year to year, which is a flimsy platform of criss-crossed twigs built in the fork of a tree. Usually two pure white eggs are laid. Incubation, brooding and feeding young are the shared responsibility of both parents. Incubation takes 28-32 days and the young leave the nest to fend for themselves after another 25-35 days.

The bulk of the Tawny Frogmouth’s diet is made up of nocturnal insects, worms, slugs and snails. Small mammals, reptiles, frogs and birds are also eaten. Most food is obtained by pouncing to the ground from a tree or other elevated perch. Some prey items, such as moths, are caught in flight, which has led to many unfortunate instances of birds being hit by cars while chasing insects illuminated in the beam of the headlights.