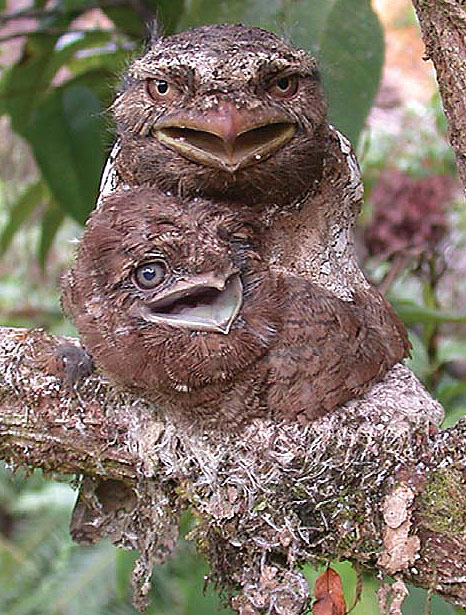 The Sri Lanka Frogmouth is about 23 cm long. It looks large-headed, and has a large flattened hooked bill and huge frog-like gape. The female is rufous, lightly spotted with white. The male is grey and more heavily spotted.
The Sri Lanka Frogmouth hunts insects at night and rests during the day. The Sri Lankan frogmouth is not very adept at flying and can seem weak in flight, yet it can fly quietly under the thick canopy at night to hunt for insects. It can be identified at night by its klock-klock-klock-klock-klock calls which can best be described as loud, cackly and frog like. It has the same quality as of pebbles rattling down. This klock-klock call is of the male and is answered with a long and harsh krsssshhh by the female.

The Sri Lanka Frogmouth inhabits dense tropical rainforest and is sometimes found in shade grown coffee plantations. It is found only in the Western Ghats of southwest India and Sri Lanka.

It builds a nest in the fork of a tree from 2?6m above the ground, lining it with moss, small leaves, twigs and underfeathers. A single white egg is laid and is incubated by the female at night and the male during the day. The white chick is cared for over a period of weeks before dispersing. Second down of the chick is rufous-buf and barred.

The Sri Lankan frogmouth is nocturnal, hunting insects at night and resting on branches during the day.