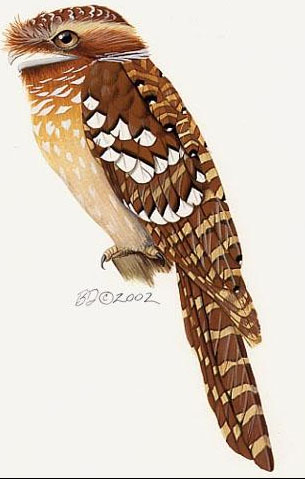 Listen to the sound of Large Frogmouth

It occurs in lowland evergreen forest including primary forest, secondary forest and swamp-forest, to at least 250 m, perhaps 1,000 m.

Nest is rather small but thick circular pad well attached to a slender branch. On one occasion the nest wasd 1-3m above ground. Clutch size probably 1.

The diet includes grasshoppers, cicadas, crickets and beetles. Hunts by sallying and gleaning insects from ground and branches

This forest-dependent species is listed as Near Threatened because it is assumed to have experienced moderately rapid declines owing to the extensive loss of lowland forests from large areas of the Sundaic lowlands. It is not considered more threatened because it can use secondary habitats.

Rates of forest loss in the Sundaic lowlands have been extremely rapid (Kalimantan lost nearly 25% of its evergreen forest during 1985-1997, and Sumatra lost almost 30% of its 1985 cover), because of a variety of factors, including the escalation of logging and land conversion, with deliberate targeting of all remaining stands of valuable timber including those inside protected areas, plus forest fires (particularly in 1997-1998)