Source to all birds on the Planet
admin
Caprimulgidae, Caprimulgiformes, Latin America
Comments 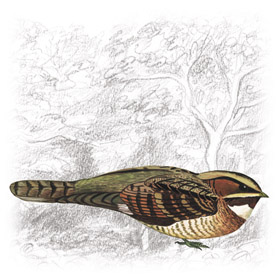 The Pauraque measures 22 to 28 centimeters in length and displays one of two distinct color schemes. One is light-colored, featuring buff, tan and beige tones; the darker scheme is more reddish-brown in overall coloration. Both color morphs are cryptic, making the bird nearly invisible against the ground or vegetation. A second line of defense is behavioral, in which the pauraque flattens itself to the ground with ?closed? eyes when danger approaches. It views the threat through slightly opened lids, slowly turning its head to keep the danger in sight. Its final defensive maneuver is to flush from this hunkered-down position.

Listen to the sound of Pauraque

Ranges form southern Texas, and northeastern Mexico south to northwestern Peru and northern Argentina. In Suriname a common bird in the forest, never in open land.

Pauraques prefer wooded habitats, but can be found in several other vegetation types, including scrubland, agricultural landscapes, semi-arid regions, llanos, marshes, and even mangrove swamps.

Two buff eggs are laid on the bare ground near a bush or a tree. Incubation ranges from 19 to 20 days and is carried out by both parents.

Pauraques are crepuscular and nocturnal when foraging. Short sallies from the ground or from a favorite perch are typical of pauraques.
Foraging is facilitated by distinctive adaptations related to the bird?s mouth and eyes. The lower jaw is highly specialized to allow the gape to open wide both vertically and horizontally; this huge mouth allows feeding on large flying insects. Along with the wide gape, the bird also sports rictal bristles, which are modified feathers resembling stiff hairs alongside its mouth (it looks like a sparse, wiry mustache). Highly tactile and controlled by specialized muscles, these bristles are thought to aid in night feeding, and probably protect the bird?s eyes from flailing insect legs and wings. The pauraque?s large eyes are placed laterally on the head, giving this night hunter an impressive visual field (imagine how much more area you could see if your eyes were on the side of your head). The presence of a tapetum?a reflective membrane behind the retina that enhances vision in low-light conditions?augments the light-gathering ability of the pauraque?s eyes, a positive feature for a bird hunting in low-visibility situations.
The bird?s low-to-the-ground foraging in open areas allows it to see silhouetted or backlit flying insects against the sky. Preferred food includes moths as well as beetles from families such as Carabids (ground beetles), Passalids (bess beetles), Lampyrids (fireflies), Cerambicids (long-horned beetles), and Chrysomelids (leaf beetles).

This species has a large range, with an estimated global extent of occurrence of 14,000,000 kmÂ². It has a large global population estimated to be 5,000,000Â¿50,000,000 individuals (Rich et al. 2003). Global population trends have not been quantified, but the species is not believed to approach the thresholds for the population decline criterion of the IUCN Red List (i.e., declining more than 30% in ten years or three generations). For these reasons, the species is evaluated as Least Concern.