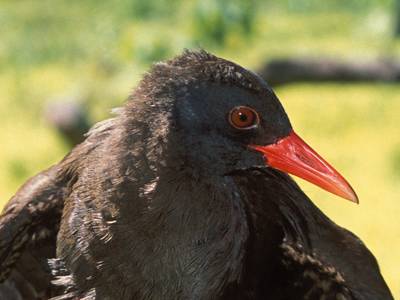 A new species of bird has been discovered on a remote island in the northern Philippines, by a team of Filipino and British wildlife researchers. The Calayan Rail is a relative of the internationally familiar Moorhen, with bright red beak and legs contrasting strikingly with its dark plumage. But unlike its familiar relative, the Calayan Rail is almost certainly flightless, and found only on the small island after which it is named.
Gallirallus calayanensis is endemic to Calayan island in the Babuyan islands, northern Philippines, where it was recorded and a specimen collected from Longog, Barangay Magsidel, in May 2004. It was found to be common within its preferred habitat (at an estimated density of one pair per 1-2 ha), and its population has been estimated at 100-200 pairs in the area surveyed. There is no evidence to suggest the population is undergoing a decline. Information on the total extent of suitable habitat is not available, but it is likely to have a very small range, possibly lower than 10 km2. The species seems to be restricted to primary and secondary forest on areas of coralline limestone that is permeated with sink-holes and caves. Within this habitat it was recorded in degraded areas with young secondary growth of low trees. It appeared to prefer areas near streams, but the strength of the association is unknown. It was not recorded in other habitats on the island, including rice-fields or open clearings, or along trails in the primary forest block on the south of the island. The type specimen was collected at an altitude of 300 m. The species forages by pecking at the ground, occasionally overturning leaves, and appears to be flightless, or nearly so. In those parts of the island with forested coralline limestone outcrops, the soil is often very thin or absent, and hence unsuitable for agriculture. The species seems tolerant of degraded habitat, and the human population of the area is very low. The species is occasionally caught in traps set for Red Junglefowl Gallus gallus, but is not directly targeted. Introduced predators such as dogs and cats are largely absent. However, the construction of a road round the periphery of the island, and a link to its centre, have already been started. These roads may encourage the spread of settlements, and hence dogs, cats and rats, and could threaten the species. Allen, Desmond; Oliveros, Carl; Espanola, Carmela; Broad, Genevieve & Gonzalez, Juan Carlos T. (2004) A new species of Gallirallus from Calayan island, Philippines Forktail Vol. 20 pp. 1-7.
download discovery article
← Previous Post
Next Post →