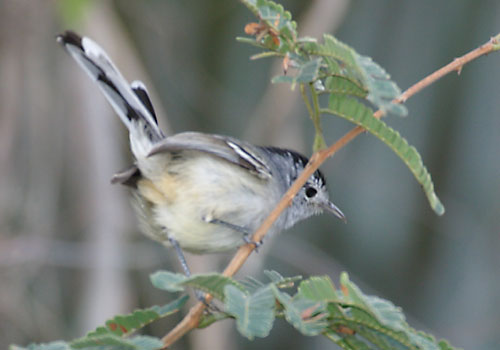 Herpsilochmus pileatus is locally uncommon in caatinga scrub and deciduous woodland in interior north-east Brazil up to 1,000 m. It has been recorded from Barra do Corda in central MaranhÃ£o, Serra do Cachimbo in south ParÃ¡, Chapada de Araripe and VÃ¡rzea Formosa in CearÃ¡, and several localities in central and south Bahia and north Minas Gerais.
The relatively small number of known localities is combined with general disturbance of its habitat – the extent of agricultural expansion, grazing and burning is testimony to the prevalence of human pressure throughout its range. Pressure has increased since the 1970s: the Brazilian oil company, PetrobrÃ¡s, has built roads into the caatinga providing access for the settlement of new areas, and government agencies have relocated many families to the region. This species is an inhabitant of the caatinga, especially mid-humid patches of semideciduous woodland and scrub. It forages predominantly in the middle and upper tree levels, especially where papilionaceous shrubs are present. Individuals of Caatinga Antwren have been known for a long time, but differences were not recognized so they belonged to H. pileatus, the Bahia Antwren. (That species is now considered to be a coastal Bahia endemic. It has atricapillus as closest relative species.)
Sellowi has a shorter and narrower bill, pale loral area, short postocular streak, and undertail coverts variably buffy. The female lacks distinct white marks in the crown, but may have buffy feather tips there.
Another distinction can be found in the (loud)song: a 2.3 seconds series of notes like that of pileatus, but with twice as many notes, at an even, double pace and slightly higher in pitch.
(Systematic revision and biogeography of the Herpsilochmus pileatus complex, with description of a new species from northeastern Brazil The Auk 117, 4 (2000): 869-891).
download discovery article