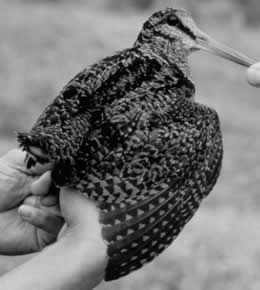 Bukidnon Woodcock Scolopax bukidnonensis is known from central and northern Luzon and four mountains on Mindanao. Specimens were obtained in the 1960s but were incorrectly identified as Eurasian Woodcock S. rusticola and it was not until birds were sighted and heard in 1993 on Mt Kitanglad, Bukidnon Province, Mindanao, and a specimen later obtained there that the species was recognised as distinct. The new species appears to locally common. Its montane forests are in extremely rugged terrain that is not conducive to farming and have few commercial trees for logging, so the species does not seem to be of immediate conservation concern. Scolopax bukidnonensis differs from the most similar species, S. celebensis, in having the notches in the flight feathers darker Cinnamon-Rufous (almost pale pinkish buff in S. celebensis); by the less extensive pale pinkish buff mottling on the wing-coverts; by the throat and breast Cinnamon and belly dark Pale Pinkish Buff(throat, breast and belly are bright cinnamon clay in S. celebensis), with broader barring on the lower throat, breast and flanks, and having barring on the centre of belly and undertail-coverts. Kennedy, Robert S.; Fisher, Timothy H.; Harrap, Simon C.B.; Diesmos, Arvin C: & Manamtam, Arturo S. (2001): A new species of woodcock from the Philippines and a re-evaluation of other Asian/Papuasian woodcock Forktail 17(1): 1-12.).
download discovery article