Source to all birds on the Planet
admin
Bucerotiformes, Eurasia, Upupidae
Comments 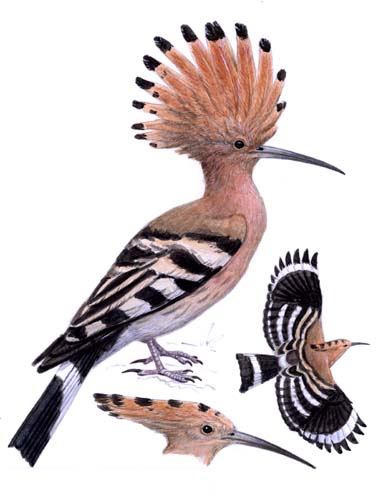 Listen to the sound of Hoopoe

Breeds January-May in Palearctic, August-Jan in Africa, and January-June in Malay Peninsula. In Southern areas double brooded. Monogamous, solitary and territorial breeder.
Nest is built in natural hole in stump, tree, wall, old building or cliff. Unlined or slightly lined. 5-8 eggs in Palearctic and 4-7 in tropics. incubation by female for a period of 16-18 days. Nestling downy in first 3-5 days, later covered in long spiny quills. First breeding at 1 year.

This species has an extremely large range, and hence does not approach the thresholds for Vulnerable under the range size criterion (Extent of Occurrence <20,000 km2 combined with a declining or fluctuating range size, habitat extent/quality, or population size and a small number of locations or severe fragmentation). Despite the fact that the population trend appears to be decreasing, the decline is not believed to be sufficiently rapid to approach the thresholds for Vulnerable under the population trend criterion (>30% decline over ten years or three generations). The population size is extremely large, and hence does not approach the thresholds for Vulnerable under the population size criterion (<10,000 mature individuals with a continuing decline estimated to be >10% in ten years or three generations, or with a specified population structure). For these reasons the species is evaluated as Least Concern.
Upupa epops is a widespread breeder across much of the southern half of Europe, which accounts for less than a quarter of its global breeding range. Its European
breeding population is large (>890,000 pairs), and was stable between 1970-1990. Although the species was stable across much of Europe during 1990-2000, several populations suffered declines, most notably the sizeable one in Turkey, and the species probably underwent a moderate decline (>10%) overall. Consequently, this previously Secure species is now provisionally evaluated as Declining.

Migratory in northern parts of range, partially migratory to resident elsewhere. Nominate epops, breeding in all west Palearctic except Egypt and southern Algeria, winters in small numbers in North Africa and Mediterranean basin, only exceptionally further north. Probably most European migrants winter in Africa south of Sahara, where not distinguishable in the field from local senegalensis. Migration (much of which nocturnal) occurs on broad front across Europe and Mediterranean, and probably across Sahara also.
Migration seasons notably protracted. Autumn dispersal spans mid-July to late October or even into November; normal termination period masked by overwintering in southern breeding areas. Begin arriving south of Sahara in second half of August, with main arrivals there September-October. Return movement detected from early February in Morocco and Malta; at peak mid-March to April, tailing off during May. In Britain and Ireland, recorded in every month but chiefly in spring, with marked peak April-May; autumn records peak September; spring records involve overshooting in anticyclonic weather and arrivals in overcast conditions with fronts moving into English Channel and North Sea.
Individuals of the dark east Palearctic race saturata apparently occur regularly in Sweden in autumn, perhaps as a result of reversed migration, some remaining through winter.