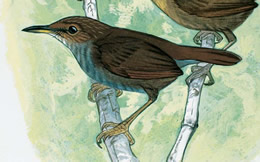 Cettia haddeni is endemic to the island of Bougainville, Paupa New Guinea. It has only recently been described, although its existence has long been known to local inhabitants.
Since 1972, ornithologists have been aware of its presence, but only through voice. Years of civil war prevented fieldwork in the 1990s and it was not until 2000 that the first individual was mist-netted1. A further two were caught within a few months and it appeared to be fairly widespread and not uncommon in suitable habitat1. However, others have found it to be absent from the highest altitudes and it may therefore only occur within a relatively narrow altitudinal band. This enigmatic species is extremely poorly known, hampering efforts to assign it conservation status. However it has a moderately small range and is probably declining owing to introduced predators and forest degradation. For these reasons it is classified as Near Threatened. This species has the head dark chestnut with faint lighter streaks in the center of the feathers, back very dark brown with wings and tail more chestnut, wings very rounded and unmarked. Sides of head brown with lighter streaks in the center of the feathers, dark loral spot, no eye-stripe, but feathers over the eye are slightly lighter; rictal bristles prominent; bill strong, broadened at base. Underparts with black feather bases tipped with gray, giving a mottled appearance, throat lighter. Flank feathers long and brownish olive; both tarsi and phalanges noticeably elongate. The Odedi Cettia haddeni is a bird species in the Old World Warbler family, described as new to science in 2006 from the Crown Prince Range on the island of Bougainville in the Solomon Islands, Papua New Guinea. LeCroy, M. & F.K. Barker (2006): A new species of bush-warbler from Bougainville Island and a monophyletic origin for southwest Pacific Cettia. American Museum Novitates 3511: 1-20.
download discovery article
← Previous Post
Next Post →