Dances were performed by the Cumash tribe for both religious and secular purposes, and some of them were inspired by animals. The Condor dancer struck two sticks together, enabling him to fly long distances quickly. Wearing their feathered regalia, the dancers were transformed from their human state into spiritual beings. Connections between people and the forces of nature were strengthened through these ceremonies. California condors also played a part in cosmic events. Among the Chumash, condors or eagles were sacrificed based on which celestial body was prominently visible at the time of the ceremony. Eagles were selected for rituals concerned with the Evening Star (Venus), while condors were chosen for rituals associated with the planet Mars.

Once the Great Condor soared across all of Soutern America, this story is told by the now extinct Hitchiti tribe. A man out hunting saw a Big-crow coming, against which people were very much on their guard because it caught human beings. The man ran away. He got inside of a hollow log, but it took him up, hollow log and all. The Big-crow flew with it toward the sky. “He went along,” said the man, “and left me at a rocky place where two baby Big-crows sat. There I remained.” While the baby Big-crows were growing up that man played with them. After he had made them very tame that man sat on a Big-crow, and it flew out and back with him. Then he considered the matter and thought to himself, “I might do this way and so get down to the ground.”
Then he made a drumstick, mounted one of the birds, and flew off on it. After he had gone a little way he struck it on the back of its head with the drumstick and made it fall so that it went lower down. When it tried to go up he struck it on the back of its head with his drumstick and it again went down. When he could see the trees he kept on until he struck them and then he got clear down on the ground and dismounted. He struck the baby Big-crow to drive it away. Then the man started on, reached his people, and told them about his adventures. This is the way they tell it. 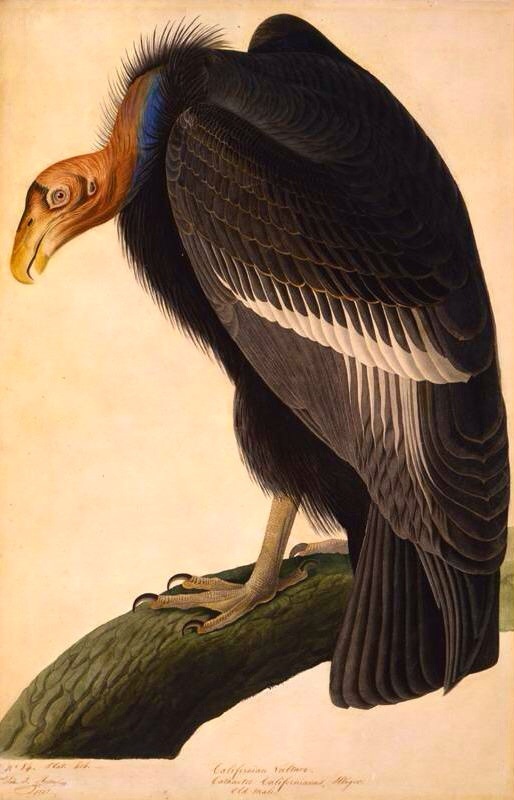 People of the Sky: Birds in Chumash Culture by Jan Timbrook and John R. Johnson Santa Barbara Museum of Natural History, 1999.
Myths and Tales of the Southeastern Indians by John R. Swanton. [1929]. Bureau of American Ethnology Bulletin, No. 88. A scholarly collection of Southeastern folklore.