The following fable is part of the Pawnee Indians legends. Kiki, the jay bird, was tahmahnawis for many, and this is the story of how he became so for S’doaks.
S’doaks went to the lodge of Itswoot and he dwelt there many moons. Then it came time for him to get his totem, and this Itswoot taught him. You are no more a boy, he said. Your years count fifteen summers. You must have the totem of a man. But listen well, for you must do as I say in all things. Go hence and seek the sweat lodge. Eat not, drink not, from sun to sun. When darkness comes, leave there your robe, your arrows, and your tomahawk. Keep only your deerskin belt of medicine charms, and go to the pine woods. There you must stay until your tahmahnawis comes.
You must neither eat nor drink, but wait till from the forest something comes to you. Then you must go to it, and it will give you food. Through life it will talk with you and be your protection. But you must never kill it, for ill fortune will follow if you are not kind to your tahmahnawis.
You must get some portion of your totem for a charm; but you must not harm him in order to take the charm. After one moon you may return to the lodges of men.
So he did as Itswoot had commanded, and he was alone in the forest many days.Then he saw Kiki, the blue jay, sitting upon a branch near by him. The blue jay talked to S’doaks, and said: My tahmahnawis has sent me. Follow me, and you shall eat. And S’doaks followed Ki-ki, and to him he said: How shall I get a charm from you and not harm you? Wait, and you shall see, said the blue jay. And he waited, for he had learned that one sees more when one does not talk. And as he waited, Kiki flew away, and in a moment S’doaks saw a mink dragging a dead blue jay after him. When the mink saw S’doaks, he dropped the dead bird and fled away in fright.
Then S’doaks took from the dead bird his eyes for a charm to open his own eyes that he might see. He took two wing feathers that he might be swift. The heart of the bird he took to make him kind, for the blue jay has ever been the friend of men. The tongue he chose for a charm that he might talk to all wild things. The brain he took that he might become wise. He placed the charms within his medicine belt, and then Kiki returned to him.
Klook-wah? He said. Talk to me whenever you need me, then he flew away, and S’doaks remained quiet in the forest for one moon. And he talked much with his tahmahnawis and learned much wisdom, and his tahmahnawis was Kiki, the blue jay.

This story is told by the Sahaptin Indians.
Frog had a smooth pole set in the ground, and with it he had devised a means of killing off all the birds. A race would be run up this pole, and whoever got to the top first would cut off the other one’s head. The pole leaned a little; and Frog would get on the upper side, and make the opponent get on the under side. Thus Frog continued to win races for a long time, and managed to kill off many birds. Coyote was in this camp. He became afraid that Frog was going to kill off all the birds. So Coyote gave a big feast, and invited everyone to attend. He wanted the people to work out a plan to get the best of Frog; but everyone was afraid to run him a race. After a scheme had been devised, BIuejay (kuyeskuyes) undertook the job; and Coyote made a speech, calling everybody to the pole, and announcing that there was to be a race between Frog and Bluejay. Now, little Frog became uneasy, and feared that BIuejay was going to win and then kill her. So when they were half way to the top, Frog tried to kick Bluejay off the pole. When they were nearly to the top, BIuejay used his wings and flew the rest of the way. He got to the top first. When Frog got to the top, Bluejay kicked her, and she fell to the ground and was killed. Ever since that race there have been no feathers on the side of Bluejay’s face, because Frog had torn them all off when she tried to knock Bluejay from the pole. After the race was over, Coyote made a speech, saying, Hereafter there will be frogs on the earth, but they will never hurt anyone. People will hear the frogs singing, and then they will know that warm weather is coming.

Among the Afro-American people of some of the Southern States in the USA, who say that the bluejay is never to be seen on Friday, because on that day he is carrying sticks to the Devil in hell. Lousiana folks are of the opinion that the jay is condemned to this weekly trip as a punishment for misbehavior at Christ’s crucifixion, but what dreadful deed he did has been forgotten. 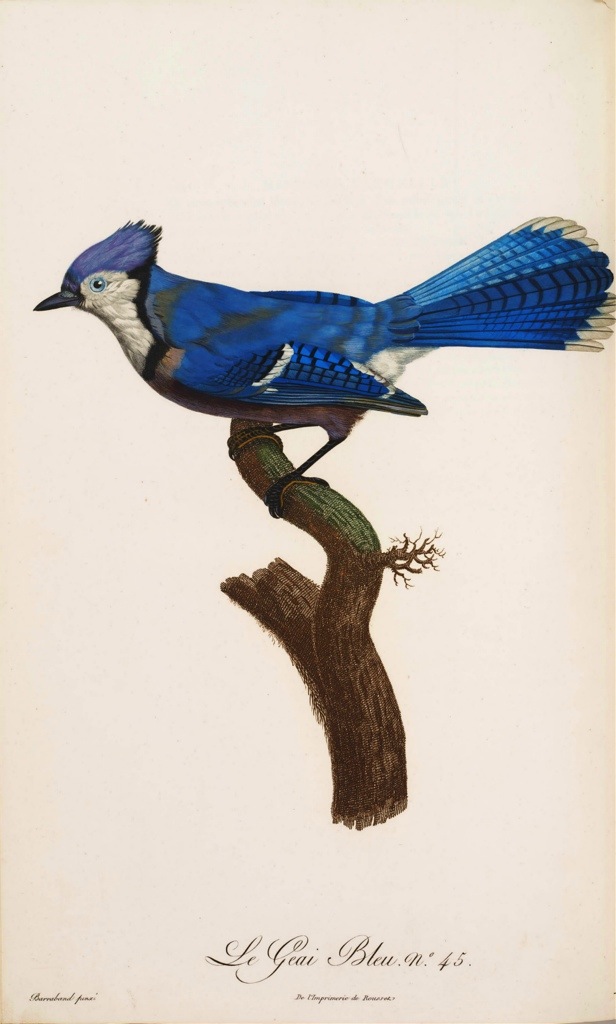