In the neighbourhood of Brescia the last two days of January and the first of February are called the blackbird’s days, the story is that this bird, whose original colour was white, became black because one year these three days were so cold that she had to take refuge in a chimney.

It is believed in Ireland that, when the blackbird sings loud and shrill, rain is sure to follow.

In some parts of Germany, the blackbird is called Gottling or little god and is supposed to be a protection against lightning if kept caged in a house.

In the Orkney Isles comes a belief that if the bird is seen near a house it betokens the speedy death of one of the occupants, or else that the family will soon move to some other locality.

A blackbird and his mate lived together on a tree. The Blackbird used to sing very sweetly, and one day the King heard him in passing by, and sent a Fowler to catch him. But the Fowler made a mistake ; he did not catch Mr. Blackbird, who sang so sweetly, but Mrs. Blackbird, who could hardly sing at all. A cage was made for Mrs. Blackbird, and there she was kept imprisoned.
When Mr. Blackbird heard that his dear spouse was stolen, he was very angry indeed. He determined to get her back and proclaimed war upon the King. As he walked along the road, he met a Cat. I’ll come with you, the Cat said: he drowned my kitten. The Cat jumped into the Blackbird’s ear and the Blackbird marched along.
Then he met some Ants. we’ll come too, the Ants said; he poured hot water down our hole. They jumped in his ear. Next he met a Rope and a Club, and when they heard that he was going to fight against the King, they jumped into his ear also, and away he went. Not far from the King’s palace, Blackbird had to cross over a River and told him of his quest. I’ll come with you, said the River and jumped in his ear.

From India comes this story. Blackbird marched along until he came to the palace of the King. What do you want ? said the King. I want my wife said the Blackbird. Seize this insolent bird, said the King, and shut him up in the henhouse. I don’t think there will be much left of him in the morning.
The servants shut up Blackbird in the henhouse. When all the world was asleep, Blackbird said, Come out, Pussy, from my ear, There are fowls in plenty here ; Scratch them, make their feathers fly, Wring their necks until they die.
When morning came, the King entered the henhouse and all the fowls lay dead. So Blackbird was shut up in the stable, among the wild Horses. At midnight Blackbird said, Come out, Rope, and come out. Stick, Tie the Horses lest they kick ; Beat the Horses on the head, Beat them till they fall down dead, and they did.
If the King was angry before, he was furious now. His horses had cost a great deal of money. Put he with the Elephants, he screamed. That night out came a swarm of Ants from the Blackbird’s ear. They crawled up inside Elephants’ brains, and stung them so sharply that the they all went mad, and died.
That night Blackbird was tied to the King’s bed. In the middle of the night, the River, came pouring out of the Blackbird’s ear. It flooded the room, it floated the King’s bed, the King began to get wet. In Heaven’s name, General Blackbird, said the King, take your wife, and begone. So Blackbird received his wife again, and they lived happily ever after. 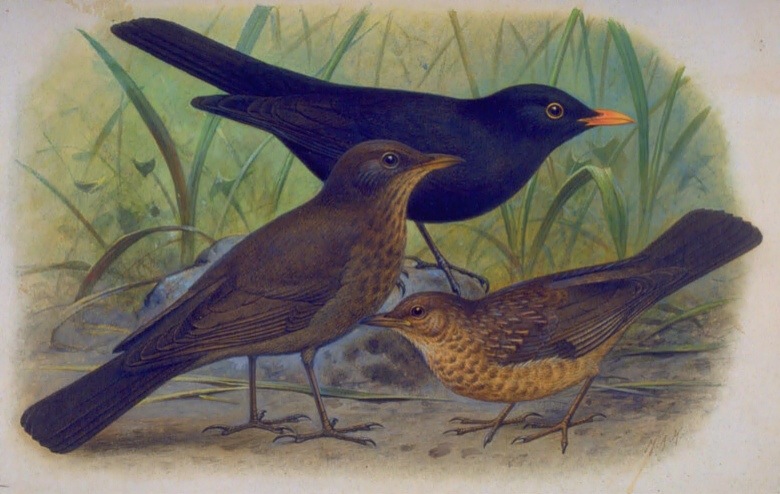