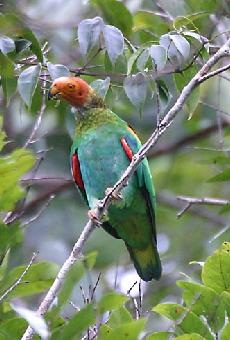 Pionopsitta aurantiocephala is known only from a few localities encompassing the Lower Madeira and Upper TapajÃ³s rivers in Amazonian Brazil. Individuals have been seen in gallery forest and in ‘campinarana’ forest (on white-sand soils). This region is under threat from logging1. Given that the species is currently known only from two habitat types and from a relatively small area, the population is unlikely to be much larger than 10,000 individuals, and it is therefore considered to be Near Threatened. More records are likely to be forthcoming now that it has been formally recognised as a species, and these may clarify its exact status. The new species, which is distinguished from all other parrots by its naked orange head, had historically been treated as an immature stage of Pionopsitta (= Gypopsitta) vulturina, a species in which adults have a largely naked, black head, bordered by a collar of yellow and black feathers. Juveniles of vulturina have feathered heads (the feathers being variably green and/or yellow). Not only did the authors find that specimens had well-developed gonads and a well-ossified skull indicating that they were adult birds but they also studied museum specimens of Vulturine Parrot which showed all stages of plumage development but none which resembled the Bald Parrot. It appears to inhabit gallery forest and “campinarana” white-sand soil forest of which there is quite an expanse near the ThaimaÃ§u Lodge and which probably links up with the white-sand area near the Serra de Cachimbo that can be seen from the CuiabÃ¡ – SantarÃ©m road. It is a strikingly coloured parrot and, were it not for its bald head could be classified as very attractive.
Gaban-Lima, Renato; Raposo, Marcos A. & HÃ¶fling, Elizabeth (2002): Description of a New Species of Pionopsitta (Aves: Psittacidae) Endemic to Brazil. Auk 119(3): 815-819.
download discovery article
← Previous Post
Next Post →