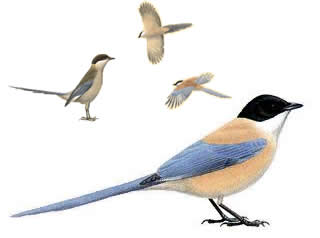 About 75% size of Magpie. Small, elegant corvid with rather attenuated form ending in long tail shaped like Magpie but looking narrower in flight. Body dove-brown, with black cap, white throat, and mainly azure-blue wings and tail. Flight recalls Magpie; other behaviour more like Jay.
Unmistakable in good view but may suggest Magpie if seen only as silhouette, and even Great Spotted Cuckoo in brief glimpse. Flight recalls Magpie but looser, with far less erratic and staccato bursts of wing-beats; progress thus more sustained, even dashing at times. Gait a light, bouncy hop; also clambers and jumps. Flicks wings and tail in excitement. Secretive rather than shy in breeding season; bold and confident at other times, roving widely in noisy groups.

Cyanopica cyanus is resident in Iberia, with Europe accounting for less than a quarter
of its disjunct global range (the rest-well separated-occurring in eastern Asia). Its
European breeding population is large (>260,000 pairs), and was stable between
1970-1990. Although the trend of the key Spanish population during 1990-2000
was unknown, the population in Portugal was stable, and there was no evidence to
suggest that the species’s status deteriorated overall.

Listen to the sound of Azure-Winged Magpie

Breeds in west Palearctic only in warm lower middle latitudes in Iberia, locally in mountain gorges at c. 700 m but also at sea-level on sand-dunes overgrown with planted stone pine and introduced eucalyptus. In Coto DoÃ±ana (Spain) such modern woodlands are fully colonized, to virtual exclusion of the locally abundant Magpie, which nests there chiefly in low bushes outside woods. Arboreal, but forages freely on ground under canopy. In contrast to far separated Asian population, shows no marked preference for broad-leaved trees, or for river banks and islands. Also inhabits open cultivated or grass country with groups of trees, scrub, or hedgerows, and orchards or groves of olive and cork oak.

Generally in fork of branch towards edge of tree crown, top often covered by leaves of supporting branch. Preferred position is in mid-crown vertically but as far from trunk as possible without being visible in outer foliage; apparently best position for avoiding predators. Nest: rough, loose foundation of twigs, inside which layer of compacted pellets of earth, mud, or dung in form of bowl 2-5 cm thick, in which is embedded rough lower part of lining (roots, pine needles, small twigs) covered by rootlets, plant down, fibres, moss, lichen, animal hair, sheepâ€˜s wool, feathers, etc., whole lining c. 1 cm thick. Fresh and aromatic stalks and flowers may be incorporated.

This species has a large range, with an estimated global Extent of Occurrence of 1,000,000-10,000,000 kmÂ². It has a large global population, including an estimated 520,000-920,000 individuals in Europe (BirdLife International in prep.). Global population trends have not been quantified, but the species is not believed to approach the thresholds for the population decline criterion of the IUCN Red List (i.e. declining more than 30% in ten years or three generations). For these reasons, the species is evaluated as Least Concern. (source Birdlife.org)