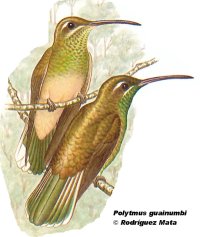 Crown dull grey with a narrow white line above and below the eyes. Upperparts shiny golden bronze. Throat, breast and abdomen glittering green, center of belly white. The long tail is rounded and emerald to blue-green. The outer feathers increasingly with white.
The female has underparts white to pale buff with green discs on throat and upperbreast. The curved bill rose with a black tip, legs are black.

Listen to the sound of White-tailed Goldenthroat

The nest is a small open cup plastered with wolly plant material. It is built between 0-2 meters up in a schrub branch fork. it is often built above water and out in the open, sometimes in close vicinity of eachother. Clutch size is 2 eggs incubated by female and lasts 14-15 days, young fledge after 20-22 days.

Nectar of flowering garden plants. Catches insects by hawking and spiders by ground and tree-gleaning.

This species has a large range, with an estimated global extent of occurrence of 4,900,000 km2. The global population size has not been quantified, but it is believed to be large as the species is described as ‘frequent’ in at least parts of its range (Stotz et al. 1996). Global population trends have not been quantified, but the species is not believed to approach the thresholds for the population decline criterion of the IUCN Red List (i.e., declining more than 30% in ten years or three generations). For these reasons, the species is evaluated as Least Concern.