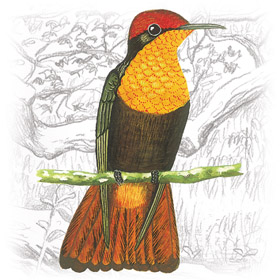 The male has green-glossed dark brown upperparts. The crown and nape are glossy red, and the throat and breast are brilliant golden. The rest of the underparts are brown, and the chestnut tail is tipped black. The male often looks dark, until he turns and the brilliant colours flash in the sunlight.
The female Ruby-topaz Hummingbird (depicted above) has bronze-green upperparts and pale grey underparts with a dark chin stripe. The tail is chestnut, tipped white. Immature males are like the female, but there is a white spot behind the eye and the outer tail feathers are violet, tipped white.
The black bill is short and straight.

Listen to the sound of Ruby-topaz Hummingbird

It breeds in the Lesser Antilles and tropical northern South America from Colombia and Venezuela south to central Brazil.

This aggressive resident hummingbird is seen in gardens, open areas and at the edges of the forest edge.

This nectar feeder particularly likes the flowers of the Samaan tree and the ixora plant and generally feeds alone. It attempts to guard patches of flowers bringing it into conflict with the Copper-rumped Hummingbird and the white-chested emerald. Apart from nectar, it also eats insects including spiders and wasps.
At the perch the males often spread their tail and ruffle their crown feathers in a display.