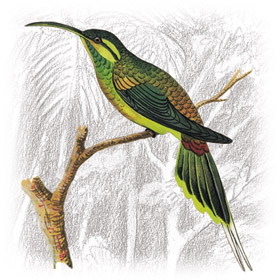 The Long-Tailed Hermit weighs between 3.5-6.6 grams. The average adult size is 15 cm long. It has two distinctive physical characteristics, a long curved bill measuring about 34-37 mm, and long tail measuring approximatly 63-68 mm in length. The feathers blend from a dark bronzy-brown head, to a white tipped tail. Long-Tailed Hermits are monomorphic, but the female has a smaller wing span and weighs less than the male. The young are identified by grey feathers at the base of the neck and on their back.

Listen to the sound of Long-tailed Hermit

The Long-Tailed Hermit Hummingbird Phaethornis superciliosus, like all other hummingbirds is a new world species. It ranges from the Tropic of Cancer (23 degrees latitude) south to the Equator in South America.

Long-Tailed Hermits can be found in lowland edges of tropical forests, especially streamside. Hermits are commonly observed in shady areas of tropical growth. They are concentrated in a warm, moist habitat where favorite food plants are abundantly found.

The Long-Tailed Hermit breeds during the wet season, January through August. The blooming seasons of certain passion flowers peak during these months, establishing an abundant food supply. The materials used to construct the nest are cobwebs, plant fibers and saliva from the hummingbird. The cone-shaped nests are securely fastened to the underside of palm leaves. The palm leaf forms an inner wall and is used to protect the nest from rain. The clutch consists of two white elongated eggs which have a 14-19 day incubation period. During incubation the female hermit infrequently leaves her nest for nourishment before returning. The female feeds her young by regurgitating food, which are insects because they provide the young with protein. The young’s fledging periods vary from 18 to 28 days. Females are unaided by males while constructing the nest, incubating the eggs and weaning the young.

The Long-Tailed Hermit feeds by hovering over a flower while extracting nectar from within the corolla using its long curved beak and specialized tongue. Long-Tailed Hermits’ primary food source is sugar-rich nectar from Heliconia, Aphelandra, passion flowers (Costus laevis) and the Red Passion Flower (Passiflora vitifolia). These flowers range in color from yellow, orange, red, and pink. There is a seasonal switch to insects when flowers become scarce or more protein is needed in the diet. Long-Tailed Hermits consume amounts of nectar that are equivalent to eating their own body weight. Hermits use much of their energy throughout the day. During the night hermits enter a state of torpor (voluntarily lowering their body temperature) so they are able to conserve energy.