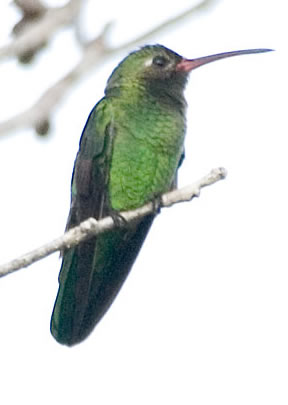 It has a slightly decurved bill where the lower mandible is pinkish with a darker tip. There is a small white mark behind the eyes. Otherwise it is bronzy green above and a pale golden-green below. The female is white below with large spangles of green.

Listen to the sound of Green-tailed Goldenthroat

The Green-tailed Goldenthroat is distributed in the northern and eastern part of the Amazon Basin and into the Guianas. There is a disjunct population in north-east Peru. In Suriname confined to sandy savanna with open shrubbery. May waner to the coastal areas outside breeding season.

It is found on the edges of sandy-belt forest and in savannah with scattered bushes.

The nest is a small open cup plastered with wolly plant material. It is built between 0-2 meters up in a schrub branch fork. It is often built out in the open. Clutch size is 2 eggs incubated by female and lasts 14-15 days, young fledge after 20-25 days.

It feeds mainly on nectar and the male establishes a feeding territory which it defends vigorously. It also feeds on insects caught by hawking or gleaning. Traplining feeder.