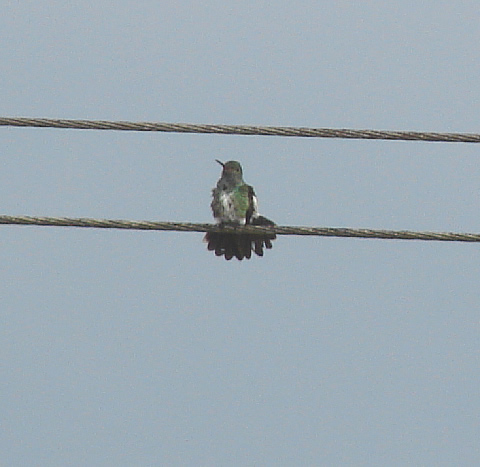 The male is easily recognised by the small white stripe on his breast and by the white near its tiny feet. The rest of the body is glimmering green (that is to say, with the right illumination). The bill is slightly curved, black, with some red at the underside (some birds have more red on their bill).

Listen to the sound of Glittering-throated Emerald

Glittering-throated Emeralds are found from Colombia through to south-east Brazil. In Suriname very common, even numerous in the coastal plane area.

The Glittering-throated Emerald is found in a wide variety of open and semi-open habitats including gardens but it is not found in the interiors of forests.

The nest was on a horizontal branch in a shrub about 2 metres off the ground and consisted of a neat cup constructed from what looked like fine strands of dry vegetation, cobwebs and lichen. The nest is made of plantmaterial and cobweb and tiny. The female, takes care of the eggs and it takes about 15 days till they hatch. Then the young stay in their nest for another 20 days. They breed in all months with 2 broods or more.

Their food is nectar, taken from a variety of flowers, and some small invertebrates which are gleaned from foliage and spiderwebs.

This species has a large range, with an estimated global extent of occurrence of 9,500,000 km2. The global population size has not been quantified, but it is believed to be large as the species is described as ‘common’ in at least parts of its range (Stotz et al. 1996). Global population trends have not been quantified, but the species is not believed to approach the thresholds for the population decline criterion of the IUCN Red List (i.e., declining more than 30% in ten years or three generations). For these reasons, the species is evaluated as Least Concern.