Source to all birds on the Planet
admin
Apodiformes, North America, Trochilidae
Comments 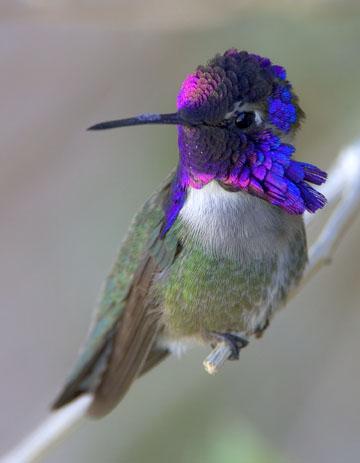 Male: Note the purple or amethyst throat and crown. Feathers of gorget project markedly at the sides.b Female:
Very similar to female Black-chin, but prefers more arid conditions. Voices differ. Often soars from one flower clump to another.

Listen to the sound of Costas Hummingbird

In courtship display, male flies high, then zooms down past perched female and climbs again, making shrill high-pitched whistle during dive; also gives same whistled call while perched. One male may mate with several females.
Nest: Site is in rather open or sparsely leafed shrub or small tree, sometimes in yucca or cactus, usually 2-
8′ above ground. Placed on horizontal or diagonal branch, usually in open spot with good visibility. Nest (built by female) is an open cup of plant fibers, bits of leaves and fl
owers, feathers, spider webs; usually has a gray look. Female continues to add to nest during incubation period.
Eggs: 2. White. Incubation is by female only, 15-18 days.
Young: Female feeds young by inserting her bill into their open mouths, then regurgitating food, probably mostly insects mixed with some nectar. Age of young at first flight about 20-23 days.

Mostly nectar and small insects.
Feeds on nectar from flowers, including those of desert natives such as agave, chuparosa, desert honeysuckle, fairy-duster; also comes to garden flowers. Drinks sugar-water and sometimes oozing sap. Eats many small insects and spiders.
Behavior: Takes nectar from flowers while hovering, sometimes while perched. Takes tiny insects caught in midair or from foliage, flying out from a perch to capture them. Will come to feeders filled with sugar-water.

Southwestern United States, northwestern Mexico.
b Migration: Many that nest in deserts in spring migrate west to the coast for other seasons. However, where flowers are present all year (as in suburban gardens), increasing numbers now remain all year.