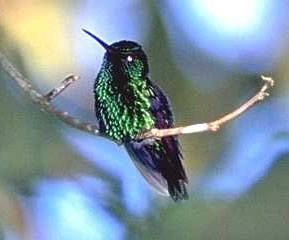 The Blue-chinned Sapphire is 8.9 cm long and weighs 3.8 g. The bill is fairly straight, with the upper mandible black and the lower reddish. The male has mainly green plumage, darker above, with white thighs, a forked metallic blue tail and blue upper throat. The female differs from the male in that she has green-spotted white underparts.

Listen to the sound of Blue-chinned Sapphire

The Blue-chinned Sapphire is a hummingbird that breeds from Colombia south and east to the Guianas, Trinidad Peru, and Brazil. There have been occasional records from Tobago. In Suriname common in plantations, open oodland in the coastal plane and Savannah forests.

It is a bird of forests and sometimes cultivated areas with large trees.

The female lays her eggs in a deep cup nest, made of lichen and other fine plant material and placed on a horizontal tree branch. Incubation is 16 days with a further 18-19 days to fledging.

It feeds mainly on nectar and the male establishes a feeding territory which it defends vigorously. It also feeds on insects.

This species has a large range, with an estimated global extent of occurrence of 4,700,000 km2. The global population size has not been quantified, but it is believed to be large as the species is described as ‘frequent’ in at least parts of its range (Stotz et al. 1996). Global population trends have not been quantified, but the species is not believed to approach the thresholds for the population decline criterion of the IUCN Red List (i.e., declining more than 30% in ten years or three generations). For these reasons, the species is evaluated as Least Concern.