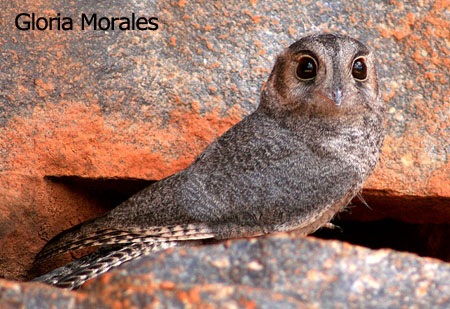 Upperparts are dark gray with pales lines and spots; underparts are paler with narrow brown lines. Sexes often similar but females vary between a gray morph and a rufous morph (with intermediates). The extreme rufous morph does not seem to occur in males, although intermediate males are known.

Australian owlet-nightjars sometimes nest in cavities of banks or buildings. Clutches are of one to five, slightly glossy, unmarked white eggs that, for unknown reasons, have unusually thick shells. Young hatch with white down which is replaced by a second coat of gray down before the juvenal feathers grow. Details of breeding are known only for the Australian species, in which incubation takes 25?27 days and is carried out at least mainly by the female, eggs hatch over several days, the young are fed by both parents, and fledging occurs after 21?32 days. No nest cleaning occurs so that droppings accumulate in the nest cavity.

Feeds mainly on insects, most of which are caught by sallying to ground from low perch. Also forages on ground for ants or other ground dwelling insects.

The global population size has not been quantified, but the species is reported to be widespread in Australia and moderately common over much of its range