Source to all birds on the Planet
admin
Anatidae, Anseriformes, Oriental Region
Comments 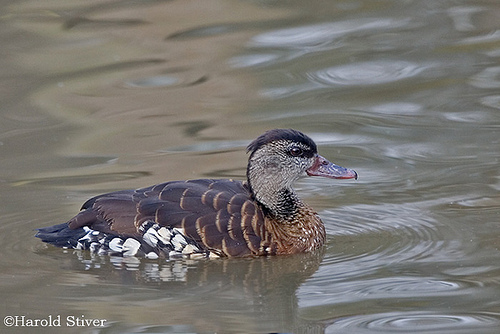 Whistling ducks comprise a group of species that are primarily of tropical and subtropical distribution. In common with the swans and true geese (which with them comprise the subfamily Anserinae), the included species have a reticulated tarsal surface pattern, lack sexual dimorphism in plumage, produce vocalizations that are similar or identical in both sexes, form relatively permanent pair bonds, and lack complex pair-forming behavior patterns. Unlike the geese and swans, whistling ducks have clear, often melodious whistling voices that are the basis for their group name. The alternative name, tree ducks, is far less appropriate, since few of the species regularly perch or nest in trees. All the species have relatively long legs and large feet that extend beyond the fairly short tail when the birds are in flight. They dive well, and some species obtain much of their food in this manner.

Face and foreneck grey, black around eyes continuing forwards to bill, blackish line along crown and continuing down hindneck. Breast and flanks chestnut with small white spots on the breast, larger spots outlined in black on the flanks extending to mottled tail coverts. Abdomen and ventral area white. Upperparts and tail dark brown with rufous edges to feathers. Wings dark brown. Bill of male Reddish grey and eyes (Iris) dark brown. Juvenile has duller colouring, lacks white spotting on the breast and the flanks appear streaked rather than spotted.

Listen to the sound of Spotted Whistling Duck

Breeding begins in September, at the start of the wet season. Yhe nest is built in in tall hollow trees, in or near the water. Approximately 11 eggs are laid which are incubated by both parents for 28-31 days. Young fledge after 45-50 days. This species forms strong, durable pair bonds which may extend for life.

Gather on top of trees to fly to feeding sites, it is a primarily nocturnal species. They dabble on the water surface, filter the surface and dive. Diet consists mainly of grass seeds and small snails.