Source to all birds on the Planet
admin
Anatidae, Anseriformes, South America
Comments 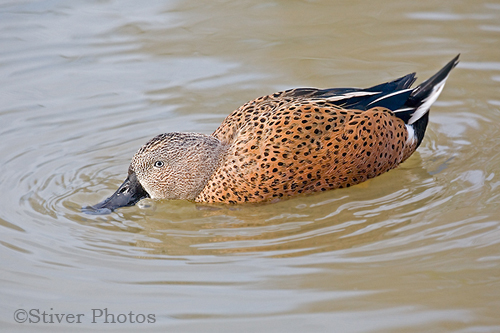 The Red Shoveler is cinnamon in color with dark spots, and a green speculum. The head and neck are grayish. The bill is slightly longer than the head and spatulate, giving the species its common name. The female red shoveler has a buffy, brown-spotted head and underparts, a whitish throat, a dark brown back with lighter feather edgings, and a dark tail, with creamy white edges.

Listen to the sound of Red Shoveler

More often found in brackish waters than other dabbling ducks, the Red Shoveler is a denizen of large coastal lagoons, lakes, and estuaries. The Red Shoveler is fairly common in the proper habitat, and sometimes gathers in huge groups of 10,000 individuals or more.

The breeding season begins in September or October and the nest is built on the ground, being constructed from twigs, aquatic plants, reeds and dry grass. Five to eight eggs are laid which are incubated by the female. for about 25 days. Mostly the female takes care for the ducklings. The red shoveler is thought to first breed at about a year old.

Like other dabbling ducks, it feeds from the surface of the water by head-dipping and upending, rarely making shallow dives in search of algae or plankton.

Populations in the southern part of its range are short-distance migrants, while more northerly populations are residents